How to Setup AWS CodePipeline for a ASP.NET Core Web API Project

At Blue Label Labs, we build most of our projects atop AWS, and many of those projects leverage Microsoft’s open source .NET Core framework.

While Blue Label, at its heart, is a Microsoft shop, that doesn’t mean we don’t see the economic and operative advantage of using Linux to host our .NET Core applications rather than Windows.

When it comes to our continuous deployment/integration (CD/CI) pipeline for the deployment of our backend technologies to AWS, we’ve standardized upon CodePipeline and its associated CodeBuild and CodeDeploy services for managing our build pipeline and automating the deployments of code from our BitBucket repositories to AWS EC2 instances running Amazon Linux.

In this article, I will explain how to set up CodePipeline to build and deploy an ASP.NET Core Web API from source code hosted on Bitbucket to a service running on an Amazon Linux EC2 instance.

AWS CodePipeline  vs CodeDeploy vs CodeBuild

For those of you new to the AWS continuous deployment/integration (CD/CI) tooling, it is worth taking a moment to understand the 3 services we will be using in this guide.

CodeBuild is an AWS service that as the name would suggest, compiles source code and emits the output of that process in the form of a .zip or .tar archive.

The CodeDeploy service is the AWS binary deployment service that is powered by a set of YAML and shell script files.

CodeDeploy takes as an input an archive, which is often the output of a CodeBuild project, and then copies this package to a set of EC2 (or ECS instances) and then executes a set of shell scripts files to copy, install and start the application contained within said archive on the target machine.

CodePipeline is the cloud service that chains together CodeBuild and CodeDeploy projects to create a single integrated CD/CI pipeline (this is by no means a complete description of what CodePipeline can do!).

2.) Set up the AppSpec.yml and associated script files that will be needed by the CodeDeploy agent at the root of the source code repository.

Within it you will define the location for shell scripts that CodeDeploy will execute during each of the 5 phases of a CodeDeploy deployment: BeforeInstall, AfterInstall, ApplicationStart, and ApplicationStop (when and what these phases do is left as an exercise to the astute reader).

These shell scripts we store in a /scripts folder under the root and will execute at the path on the file system listed in the destination parameter.

Here is our appspec.yml file: 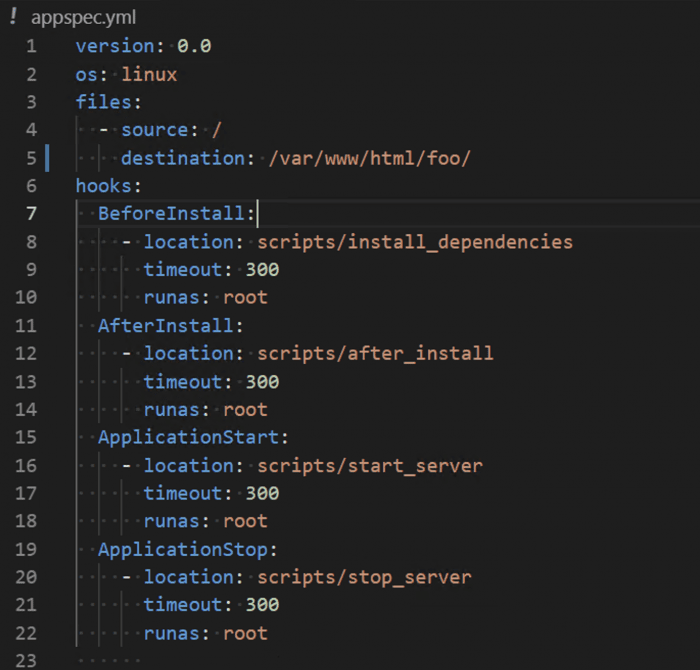 This ApplicationStop command will be run by CodeDeploy before each subsequent deployment after the first.

3.) Create a new CodeDeploy application in the AWS console.

In a baffling example of poor UX, while the AWS CodePipeline wizard allows you to create a CodeBuild project inline, it does not allow you to do the same for CodeDeploy.

Putting it all together: Creating the CodePipeline

Phew, now that we got all that out of the way we are ready to begin the process of setting up the CodePipeline that we will use to build and deploy our ASP.NET Core Web API.

In the AWS management console, create a new CodePipeline project and set up its basic parameters as normal.

1.) Configure the Source phase of the new pipeline:

Generally, we set up 2 independent pipelines, one for testing and the other for production and link each to a different branch in the origin repo.

2.) Configure the Build Phase to use CodeBuild to compile the source code fed into it from the Source phase.

This step, as the name would imply, leverages a hosted build environment to compile your source code into the executables that will eventually be deployed to the Linux machine.

In setting up the CodeBuild project, you will be asked to select the build environment to use; for this example choose a Windows base image like “/aws/codebuild/windows-base:2.0”.

The buildspec is a YAML formatted file that contains the instructions used by CodeBuild to compile your code.

For this example, this is the CodeBuild buildspec file we will use:

The root directory from which they execute is the root directory of the repository we are building. Since we are looking to deploy these binaries on an Amazon Linux instance, hence we instruct the compiler to emit binaries for Linux using the -r flag.

Again this is a simple file notation rooted in the source directory of the repository.

3.) Configure the Deploy stage to use CodeDeploy to copy and run the binaries emitted as Artifacts from the CodeBuild stage on the Linux host.

Once the pipeline is created, then as the English would say: Robert is your mother’s brother (translation: you are done).

You can test whether your pipeline is working by adding a small change into your source tree.

Upon pushing the change, you will immediately see your pipeline start to run in the AWS console.

If all 3 phases complete successfully (as will be evidenced by a screen that looks like the below image) then you have succeeded in your quest to use CodePipeline to build a CD/CI pipeline for a ASP.NET Core Web API project: 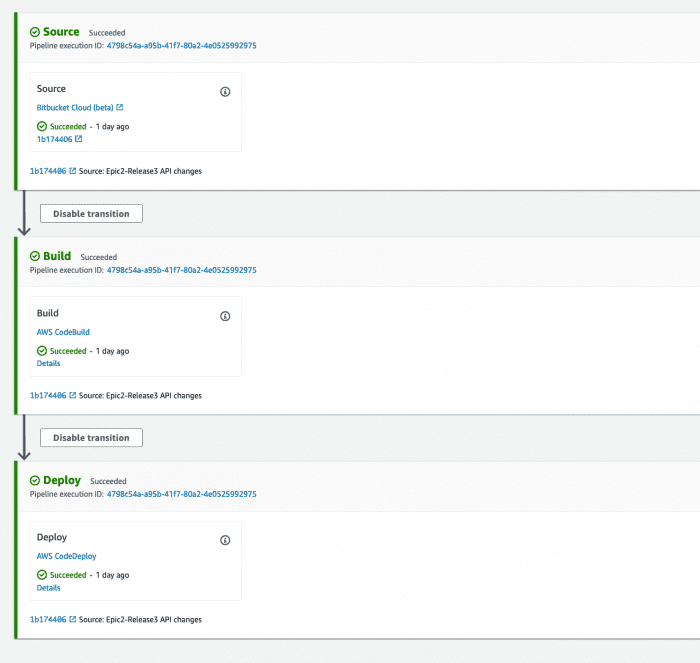