Our Inspiration Behind Our Game “Orbit Path”

It actually all started with a children’s bedtime song.

Voyager 1 made history in 1977 when it orbited out of our solar system and into the galaxy. It had gone farther than any human or man-made object had ever gone. The probe had a primary mission that included flybys of some of our universe’s most well-known planets, including Jupiter and Saturn. Even now, Voyager 1 is on its extended mission exploring the outer heliosphere. Similarly, in 2011 the spacecraft, Juno, was launched from Cape Canaveral with a similar mission, but this time to explore and gather more clues about how Jupiter was formed. Juno has also been continuing on its mission completing flybys ever since.

These two solar adventure stories were strong inspirations for Jordan Gurrieri. Jordan is co-founder of Blue Label Labs, an app design and development studio headquartered in New York City. We asked him to tell us the story behind their latest game, Orbit Path, a mobile gaming app available on iOS and recently released on Android. Orbit Path lets you immerse yourself into space, getting a sense of just what it feels like to be the Voyager 1 or Juno. We found out that there was even more behind the story, including where the game’s inspiration actually came from. 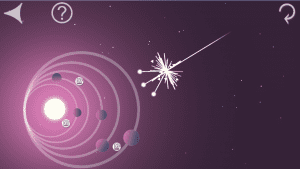 Can you tell us a bit about yourself and Blue Label Labs?

As a company, Blue Label Labs doesn’t traditionally focus on games, however me and a number of team members are avid gamers and very curious about gaming development in general. Orbit Path is not our first mobile game, but it is the one we have put the most time and attention into to-date.

Why did you decide to create Orbit Path?

Mostly to learn about game development with Unity. I wanted to create a simple, easy to play, casual arcade game, but needed a concept. The idea came to me while singing a bedtime song to my two year old son about the planets, moon and stars. The song was Frank Sinatra’s “Fly Me to the Moon” the song goes:

Let me swing among those stars

On a, Jupiter and Mars

Thinking about the challenging aspect of gaming, I thought, what if the goal was for the player to not hit the planets. With this simple concept in mind, I challenged myself with learning Unity and developing a prototype of the game. Within a weekend I had a working prototype with about 6 levels and a very basic design. I had a few members of the team at Blue Label Labs try the game out on their iPhones and iPads. Everyone loved it and encouraged us to put a small team behind it to bring it to market.

Did you expect to get as much excitement around the app as you did (especially from your team members)?

No, I didn’t actually. We have many other projects that we’re working on for clients and I didn’t expect Orbit Path to be a hit or even a priority with everything already on everyone’s plate. 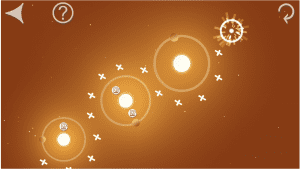 You’re obviously interested in science, besides wanting to develop a game in Unity, was there a particular planet that inspired you as well?

Initially it was really the story of all the planets, but the most recent flybys of Juno really became a huge influence as the project evolved. I’ve also always been inspired by Voyager 1, it was the  first human-made object to leave the our solar system’s sun and planets, going into the rest of the galaxy. The idea now is that our vessel is actually a probe originally launched from earth. Very much like the Voyager 1, you’ve completed your original mission and have exited our solar system. Now you’re free, flying aimlessly through the vastness of space, free to explore new worlds. So, you continue to travel from world to world, exploring the far reaches of space, passing closely through orbits, and taking pictures along the way. Just don’t crash! We’re trying to touch upon people’s curiosity of being able to travel the vastness of space as a simple explorer.

What other games have you created and what’s next?

Our last game, Word Hack reached #3 in the US app store for Free Word Games. Word Hack was a word puzzle game. With Orbit Path, we wanted to challenge ourselves further and set out to design and build a casual arcade game. Next, we plan to continue to challenge ourselves and get deeper and deeper into game design and development, with something larger and more challenging.

Can you sum up Orbit Path in one sentence?

Orbit Path is a fresh twist on the familiar “slingshot” style of mobile gameplay and set in the tranquil, yet immersive atmosphere of space.

You can download Orbit Path on the iTunes Store or on Google Play today!