How We Brought RentLion To Life: Going From Idea To Beta

Sometimes we encounter ideas that seem quite complex during the initial pitch. Other times, clients like RentLion approach us with something that just makes sense.

Create a sensible portal for renters and tenants that both provides real-estate tailored services as well as allows interaction between both parties.

The CEO of RentLion envisioned bringing a real-estate platform to life that would allow landlords to onboard, manage and interact with tenants. The idea was to make it as accessible as possible which meant creating a web-based interface as well as apps for iOS and Android. Landlords with smaller operations (meaning less than 50 properties) often use a mixture of different software which makes various processes time-consuming for them and tenants which is what the software aims to solve. Quite simply, the platform needed to simplify this often arduous dynamic.

RentLion’s goal was to combine these features into one intuitive app that’s available on multiple platforms for both landlords and tenants as well as provide other value add-ons over time. Let’s walk through how we helped their idea go from a concept to reality.

Getting RentLion started with a design sprint

For every project we start, our process begins with a week-long design sprint to hone in on the goals of the idea and ultimately develop a working prototype for users to test on the final day. The idea from RentLion seemed like a fairly simple concept. We determined it required three different segments for an initial rollout.

The discussions began in October 2018 then moved into a one-week design sprint where we began to solidify the goals of the project and put everything “on paper.” To do so, we interviewed landlords and renters then worked to develop a clickable prototype of the product.

As luck would have it, some of our staff at Blue Label Labs own rental properties. We were able to gain invaluable insight from these individuals who both understand the nature of the market for RentLion as well as know our business process.

After ironing out some of the other business details, we were able to begin development in January 2019, starting with the landlord web app and a tenant app for iOS. This was the baseline we needed to get the structure correct – to scale the platform and interact with other technologies, we established a common framework for the technology stack, just as you should in any app development process!

We decided to build out the web app for landlords using ReactJS because of its ability to scale and display dynamic web content on any device. At the same time, we developed an iOS client for tenants using Swift which is the preferred development environment for the catalog of Apple products.

During the design sprint, we developed a three-part storyboard on Miro to help us visualize the big picture of RentLion’s idea. Once we had everything down drawn up, we transitioned into the more design-intensive process and created mockups using InVison.

On the backend, we implemented at SQL server powered database to securely retain the information. From here, this would allow us to use .NET web services to safely and quickly transmit information between the database and endpoints. To host these apps, we deployed the ReactJS app and the .NET service to AWS using Docker and EC2, respectively.

For the payment end – which arguably one of the most touchy components – we decided integrating Stripe would be both safe and simple. Stripe Payments enable seamless credit card or direct debit rent payments that can be scheduled for monthly lease amounts and ad hoc additional charges. Using Stripe Connect, we’re able to securely and automatically distribute tenant payments to the bank accounts of landlords.

To facilitate reliable communication between tenant and landlord, we implemented SendBird. This solution essentially kills two birds with one stone: it provides a solid chat solution so parties can securely communicate and it also furnishes transactional email processing by tying in with the Stripe system.

After many rounds of testing and development over the next nine months, we were comfortable with making the service available to the public.

Last September, we were able to launch a beta version of the app to a group of 20 landlords. The beta site for RentLion is now widely available to those who want to kick the tires with the tools we built into the first incarnation of the service. 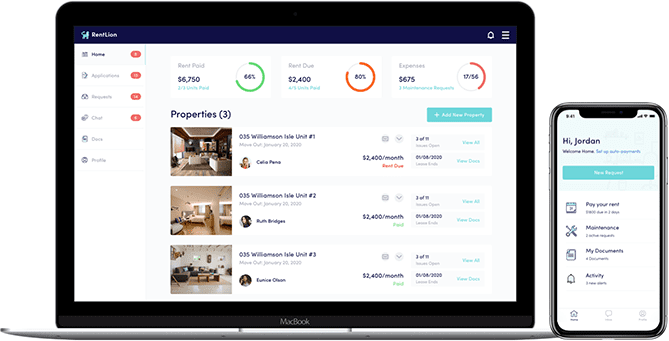 Our design sprint and the testing process would ultimately allow us to furnish a model that our test users could grasp which gave us the ability to furnish an interactive environment where users could test the platform. Between our initial designs and feedback, we were able to develop and launch the official beta on September 10th, 2019.

Here are a few screenshots of the iOS app for tenants:

Working with RentLion: A Testimonial

Our experiences with the great people from RentLion were nothing short of a joy, despite the occasional challenges that surface with any development endeavor. Through solid communication and dedication, we were able to produce the digital product they expected. Here’s what the CEO had to say:

“The software has recently launched to a little under 20 users, and results have been positive. Amicable and dedicated, Blue Label Labs has played an instrumental role in designing the product. They’re responsive to client needs and remain transparent about all aspects of the project.”

Creating excellent software is a challenge but incredibly rewarding when the process is executed properly. We were able to work through a sprint with RentLion and develop an app that captured the essence of their vision and translate it into a viable product to leverage their business efforts.

We can build an app for any enterprise and work with just about every idea that comes our way. If you’re serious about building an app for your business, get in touch with us at Blue Label Labs to learn more about how our process works and how we can turn your idea into a reality!