How To Use PostgreSQL Triggers to Automate Creation & Last Modification Timestamps

Aside from a field named “id”, the next two most commonly found columns in a typical database table are usually some form of timestamp column to track the date the row was created at (ie. “DateCreated”,”date_created”,”created_at”,.etc) and the date that the row was last modified (ie. “DateModified”, “updated_at”, “last_modified_date”,etc.).

Knowing when a row was inserted and when it was last updated are important pieces of information that are used across all kinds of apps.

A data synchronization tool might use a modified date to identify rows that have changed since the last sync, while a dating app might use the creation timestamp to identify spam accounts.

While the creation timestamp is usually very straightforward to implement and enforce usage, making sure all developers on a team are always properly updating the date of last modification on every row across every table can become a tediously annoying management task.

No matter the length and breadth of your engineering standards, there is always that one developer who will not properly keep these values up to date and in doing so introduce very serious issues to a code base.

The moment that the values within a modified timestamp can’t be trusted to be accurate, you’ve not only destroyed the utility that timestamp is meant to provide, but also turned a potential asset into a liability as any other code that relies on these timestamps breaks.

Luckily, for those working with the PostgreSQL database there is a very easy to way to overcome this issue by remove the responsibility for setting and maintaining of these timestamps from developers and putting it into the hands of the database itself.

This is done through the PostgreSQL feature known as triggers.

With triggers, it is trivial to automate the management of the creation and last modified date timestamp fields.

A Trigger in PostgreSQL is a special type of user defined function that is automatically invoked by the PostgreSQL database any time a particular set of events occur at the row level (or statement level) within a table.

So in order to automatically populate and maintain creation and modification timestamps, we will be defining a generic function (called a Trigger Function) as the database level that will contain the logic for the updating the timestamps and then binding that trigger function to events within each table through the definition a Trigger at the table level.

For you alpha-dog SQL jocks out there who scoff at the use of any GUI tool, setting up PostgreSQL to automatically maintain the creation and last modified timestamp is as easy as breaking the confidence of an intern developer.

Assume we have a database table named “user”, and columns named “date_modified” and “date_created”, here are the steps to setting up PostgreSQL via SQL commands to automatically populate those columns:

1.) Define the Trigger Function at the database level

The first step is to setup the single Trigger Function that will contain the logic for updating the two timestamp columns.

In the below SQL, we define a generic piece of code which will determine whether or not it is being executed as as result of an update or insert operation.

In this case, the function is able to dynamically figure out what the operation is and what table it is being executed on by accessing a set special variables exposed by PostgreSQL to trigger functions.

2.) Create a Trigger on each table

Now for each table in your database, you create a Trigger which defines the event binding between the trigger function defined in 1.) with the events on that table that should execute the aforementioned function.

For this example, we want the trigger function to execute *after* any insert or update operations, but there a myriad of different conditions you can use for setting up a trigger.

Triggers can be defined to execute at the row level, meaning that the trigger function is called for each row that is modified or at the statement level which triggers the function only 1 time no matter how many rows are modified.

For our user case, a row level trigger is what we need. Note that I’ve added a condition checking that the trigger only fire if

It’s important to include this otherwise you will end up in an infinite loop of your trigger code updating fields on your row there by causing the same triggers to fire again, etc.

I have no shame in admitting I prefer using the pgAdmin web-based management tool when working with PostgreSQL, it just works!

1.) Define the Trigger Function at the database level 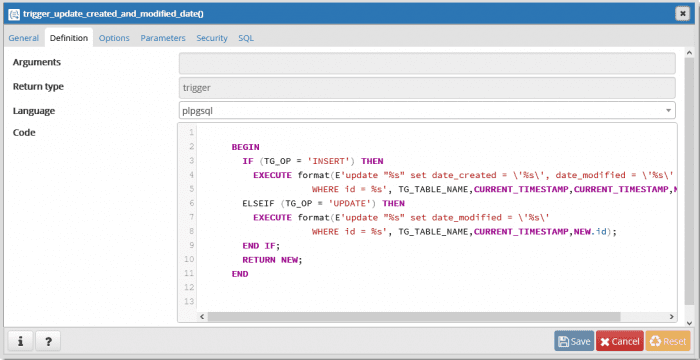 2.) Create a Trigger on each table 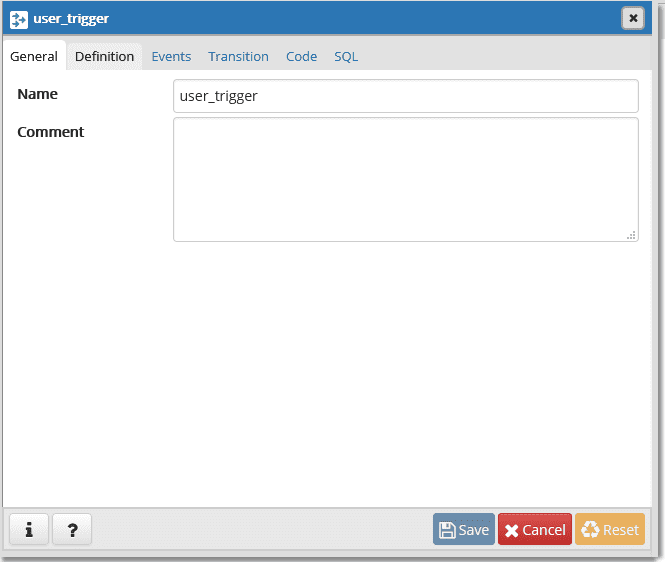 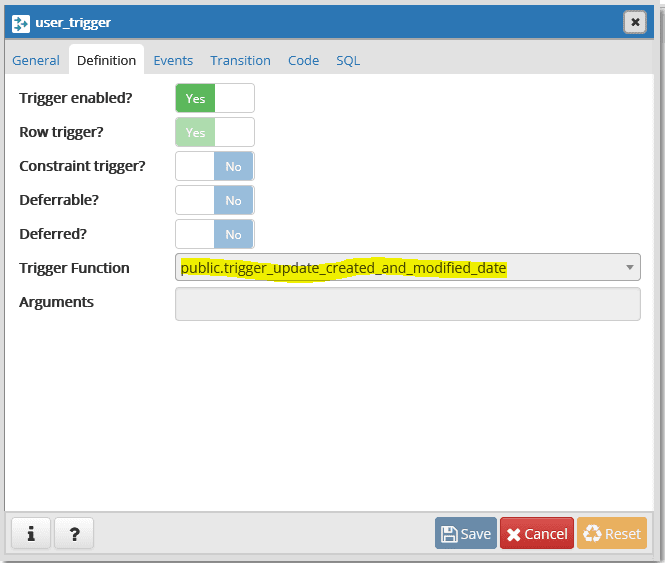 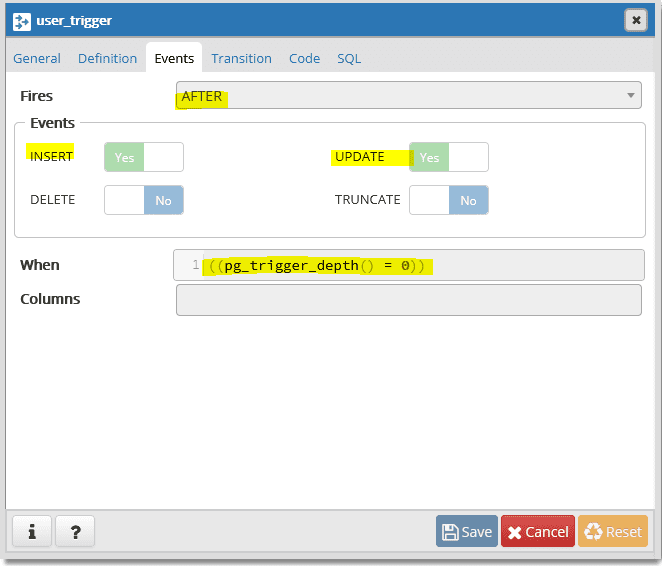 Creation and modification timestamps are important, and the integrity and accuracy of each need to be guaranteed in order for those columns to be used within application logic.

Rather than rely on human developers to ensure their code properly updates these timestamps, leverage the trigger functionality within PostgreSQL to automatically manage these fields and guarantee their accuracy.