VR, AR and the Future of Technology 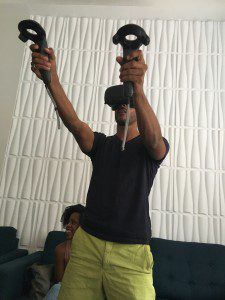 One of the most exciting new developments of the technological world has been the growth of AR and VR technologies. VR and AR products are on the rise, with 9.2 million VR headsets shipped globally, and over 30 million American users of AR products in 2016. These numbers are only expected to grow exponentially over the next few years. At Blue Label Labs, we have worked with clients across Healthcare, Real Estate, and Travel industries to develop AR and VR apps, and have a proven track record of bringing VR/AR apps to market.

VR, short for virtual reality, is a technology that places the user in a simulated world, often with the use of a headset. The headset generates realistic images, sounds, and sensations that make the user feel that they are inside of the simulated world.

AR, short for augmented reality, is a view of a physical environment that has been augmented by technological inputs such as sound, video, or graphics. Simply put, it is a view of reality that has been modified by a computer or phone. Examples of this would be Pokemon Go, with its virtual characters placed in the physical world. Or Snapchat filters, which modify one’s appearance with the use of computer-generated graphics.

VR technology is constantly developing and expanding its uses. One field that is beginning to tap into VR is healthcare. Time Inc. has just developed a self-guided meditational tool that uses VR technology. The tool is intended to encourage wellness and mindfulness as a way to manage stress. VR in the medical field has also been used as an educational tool, exemplified in the first VR surgery performed in London last year. VR can also affect the patient experience, experts believe that training, clinical assessment, intervention, and health and wellness will be transformed by VR technology.

While AR has been mostly confined to phones, experts believe that the future of AR is with headsets and eyeglasses. While previous eyeglasses have not had much success with consumers, they have found a home within the business world. Boeing uses Google Glass to display technical diagrams to workers which allow them to have their hands free to perform tasks. Medical startup Scopis has developed an app to guide surgeons through spinal surgeries. Experts believe that AR will be further implemented into existing devices. Rear-facing cameras on cars with graphics to guide drivers as they back up is an example of AR. So are features like “lane-changing assist” and “adaptive cruise control”. Other examples of AR in everyday life are the Smart mirrors at Sephora stores that enable virtual makeup testing, as well as the smart mirrors at Neiman Marcus that let consumers change their outfits and try on prescription glasses. AR is slowly, but surely, assimilating into our lives with each additional feature.

Cove Photo by NeONBRAND on Unsplash