Entrepreneurship is all about taking risks. It all starts the moment you finally decide to stop talking about turning your idea into an app and actually taking the plunge to becoming a full-fledged appster. You risk money, time, and maybe even your sanity – most importantly, you risk failure.

But it doesn’t stop there.

Each step of the app development process presents an opportunity to make key decisions that can either make or break your app. Below are five risks app developers should take in their journey.

Many new app developers think that they need to pack their apps with every feature they imagined it to have. Not so fast. Building robust, feature-rich apps requires a significant investment of time and money that you don’t really need to spend. You can build up your app to greatness the lean way by going bare. App development is a learning process. Take the startup approach and create a minimum viable product (MVP) to learn more about what people really want and avoid wasting funds on features they don’t. Find out more about creating MVP apps here.

It’s no secret that games and social apps are the big money makers. It’s also where the competition is. There are plenty of other categories and underserved markets out there that lack great apps people need (or don’t’ know they need, yet). While it’s risky to build an app in an area where there seemingly isn’t a lot of money to be made, it’s a gold mine if you hit an untapped niche that people love. We’ve got an entire post dedicated to niche apps and how you can make it work for you here.

Trends make our lives easier because they show us exactly what people want. By definition, however, trends change and trends go away. This makes it very risky to invest the time and money to develop apps based on what’s hot right now. The secret is to take that trend and give it some context, such as an indication of where an industry is headed or what people will want in the future, and then give it your own unique flair. Tinder, a geolocation dating app, took the online dating trend to a whole new level. Everyone said it was too creepy to use Facebook and your phone and your location to find love, but because it doesn’t allow unsolicited messages and is basically considered a dating game based on looks, Tinder takes away all the noise and creep factor associated with online dating.

Often, apps just need a bit of leg work to add new features and fix bugs. Sometimes, they require a complete overhaul to get them where they need to be. It’s a huge risk starting from scratch, but if it will save you tons of time and spare you the headaches of changing things around, it’s totally worth it to just build from the ground up. Dani’s List, a fun to-do list app, did exactly this. Find out how developers gave Dani’s List a fresh new look and made it into better, more user-friendly app by starting over here. 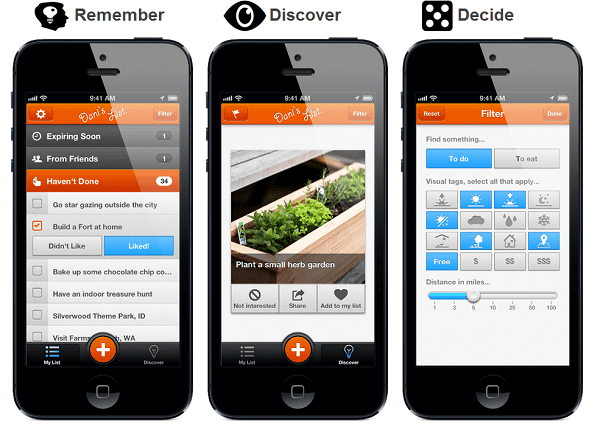 Everywhere you look, including this site, everyone is always telling you to do this and do that and jump off a cliff in order to have a successful app. This is probably the best advice anyone can give you: don’t listen to us. For the most part we know what we’re talking about and you shall obey, but there are times when you just have to break the rules and trust your gut. If someone’s words of wisdom sound like the dumbest POS advice you’ve ever heard, don’t do it. You might be making the biggest mistake of your life walking down that deserted road with everyone laughing and pointing their fingers at you from behind. You could also be making the best decision you’ve ever made in your appster career.