[Infographic] Android vs iOS: a Tale of Platform Fragmentation

As a startup the choice between launching your app on Android or iOS is an agonizing decision that will lock you into 1 of 2 worlds. From a marketshare perspective, Android is very enticing with its ~60% global marketshare and its 75% marketshare in Q3 2012. However, these numbers hide an inconvenient truth that Android isn’t really a homogenous unit of devices, but rather it’s a quilt made up numerous different device types, each manufactured by different OEMs, which then run any one of the 18 versions of the Android operating system released to date.

After some research, I created this infographic to illustrate the difference between Android and iOS when it comes to version fragmentation. 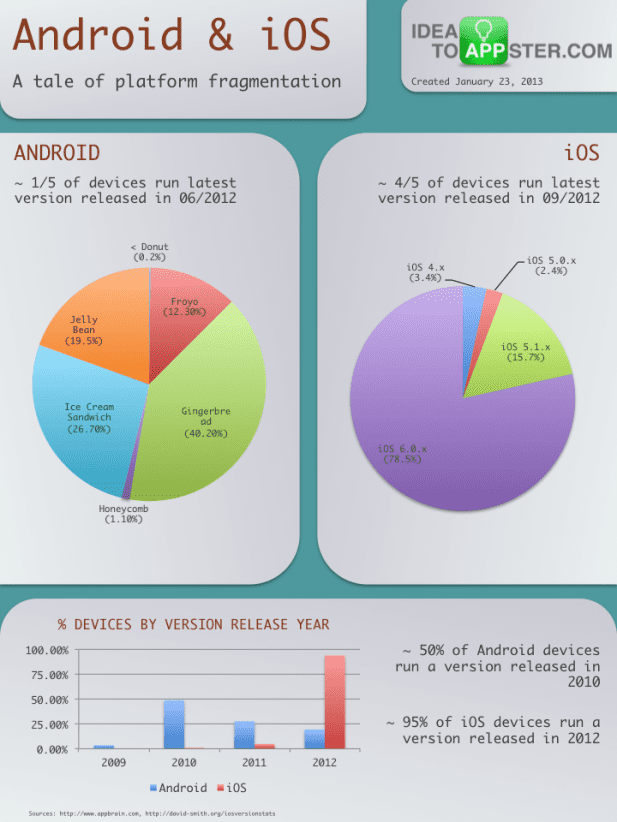 My own experience has taught me that it’s very hard to build an app that will run well across different Android devices, very hard. Part of this is due to differences in how each phone OEM adopts Android to their devices and the other part is due to the number of different versions of Android running around in the wild. When you choose to build on Android, not only do you need to select a subset of hardware devices to support, but you then need to choose exactly which versions of Android you will build on. If Android were a political entity, it would be akin to the European Union, a loose federation of independent state. On the other hand, behind the Iron Curtain of Apple is a homogenous landscape of iOS devices all manufactured by Apple and most of which are running the latest version of iOS.

Before you choose to go down the Android trail, decide exactly what flavor of Android and which hardware manufacturers you will support otherwise the resulting frustration might be enough to cause your developers to throw themselves off a bridge.

Within the iOS development community, there seems to be a heated debate between SwiftUI and UIKit.  Both of these frameworks offer a variety of benefits, while at the same time,…