Microsoft Surface: Not Yet an iPad Killer

Hating on Microsoft is en vogue. Lobbing potshots at Microsoft is like knocking down the fat kid in dodgeball, it’s easy and fun. With a pile of high-profile flops that include Kin, Windows Vista and Zune, it’s hardly undeserved. However, with the Xbox 360, Windows Phone 7 and now the Surface tablet (running Windows 8), Microsoft has quietly built up a lineup of devices that deliver a compelling unified vision of the post-PC future. For anyone who uses a Xbox, or for the 12 people with a Windows Phone, the Windows 8 “Metro” UI is nothing new. For those who might have missed it, the Metro UI is beautiful, and unlike Android, not a thinly-veiled knock off of the iOS. The Microsoft Surface feels just like the Xbox or Windows Phone does, and that is a very good thing. 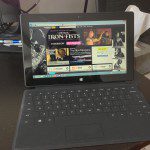 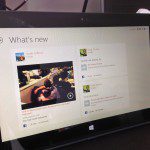 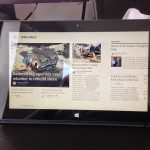 By itself, the Surface is a formidable competitor to the iPad, but when used alongside an Xbox or Windows PC, it shines. I’m able to pick videos on my Surface, and then play them on my TV or Windows 8 PC, or even use the Surface as a remote control / keyboard for my Xbox.

Oh and before I forget: the machine is well built, very well built. Yesterday, I accidentally dropped my Surface from about 6 feet…onto hardwood floor…without a cover. The result? Not a scratch, dent or rattle to be found, my Surface still works!

But Surface is still a v1 product, a Microsoft v1 product. The built-in apps are buggy, and on more than one occasion I’ve had to exit my Metro induced dreams of the future, open up the Task Manager and kill an errant app. (Notable mention goes to the Windows Store app which hangs whenever I switch to another app while it downloads updates). The keyboard cover is cool to look at, but it’s not so great to type on. Everytime I use it, it makes me feel like I am using some vintage 2007 netbook.

Oh, and the apps, there aren’t many! Don’t expect to get a Surface and recreate your iPad lifestyle, the Windows app store is as bare as the shelves of a Soviet grocery store . However, the few apps that have been released for Windows 8, most notably the Wikipedia,  New York Times app and yes, even the built-in Bing News app are simply beautiful.

If you look at Surface purely as it is today, it’s by no means an iPad killer.  However, the Surface is just the opening salvo of Microsoft’s charge into the tablet form-factor. The bugs will get fixed, developers will create more apps, and very soon the Surface will be on its own a very credible alternative to the iPad. But that’s not the best part, the Surface is much more than a tablet, it’s another pillar in a ecosystem of devices that include Xbox, Windows PCs and Windows Phones. Taken together, Microsoft is lining up to deliver a seamless experience across phone, PC, tablet and TV that is miles ahead than anything offered by Apple or Google.

How to Make Sure Your App is HIPAA Compliant? The Experts Weigh In

Whether you’re looking to build an Android or iOS device, HIPAA compliance in mobile apps is increasingly important as medical services happen over remote programs. Let’s have a look at…