Looking Beyond the Hype of NFTs & Upcoming, Real-World Uses

Several things are coming together in the tech world under the umbrella of Web3 and NFTs are among the most tangible.

But right now, most of the people who are truly embracing (and profiting) off of NFTs are interacting with them as if they’re any other valuable commodity which skews the perception of the general public.

By knowing what’s ahead and how NFTs will likely “shift” in utility, businesses better plan for a future that can outlive the new romance that’s influencing a lot of what we see right now in the market.

An NFT can be virtually any kind of file you can think of from a JPEG to Word Doc could be minted on supported blockchains like popular solutions made with Ethereum or Polygon.

Right now, a vast number of NFTs have significant dollar values attached just because they can. 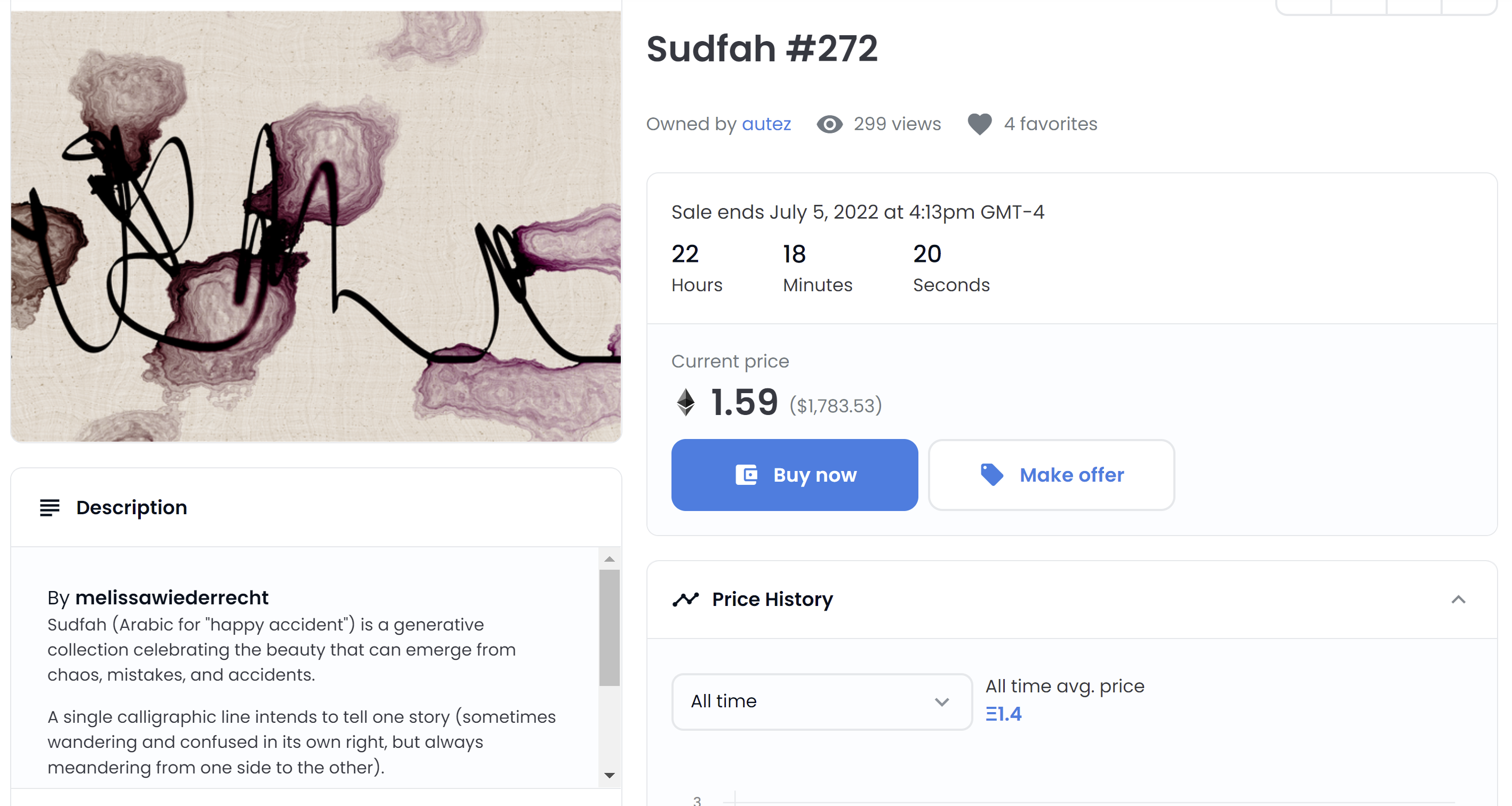 This is a great example of why many NFTs you can find on marketplaces like OpenSea right now aren’t good examples of the tech’s potential. | Source: OpenSea

Many items that are being bought and sold at wildly high dollar amounts like the one above are mostly attracting investors in the hopes that they will hold or grow in value like a copyrighted piece of artwork.

Though the image above currently has little to no use beyond the capabilities of its file type, NFT art will eventually grow to become useful both organically and because of specific, upcoming Web3 designs.

For example, picture a game like Animal Crossing eventually being able to connect to crypto wallets to pull NFT files to be used for textures on cool furnishings you make for your home or to trade with other users. 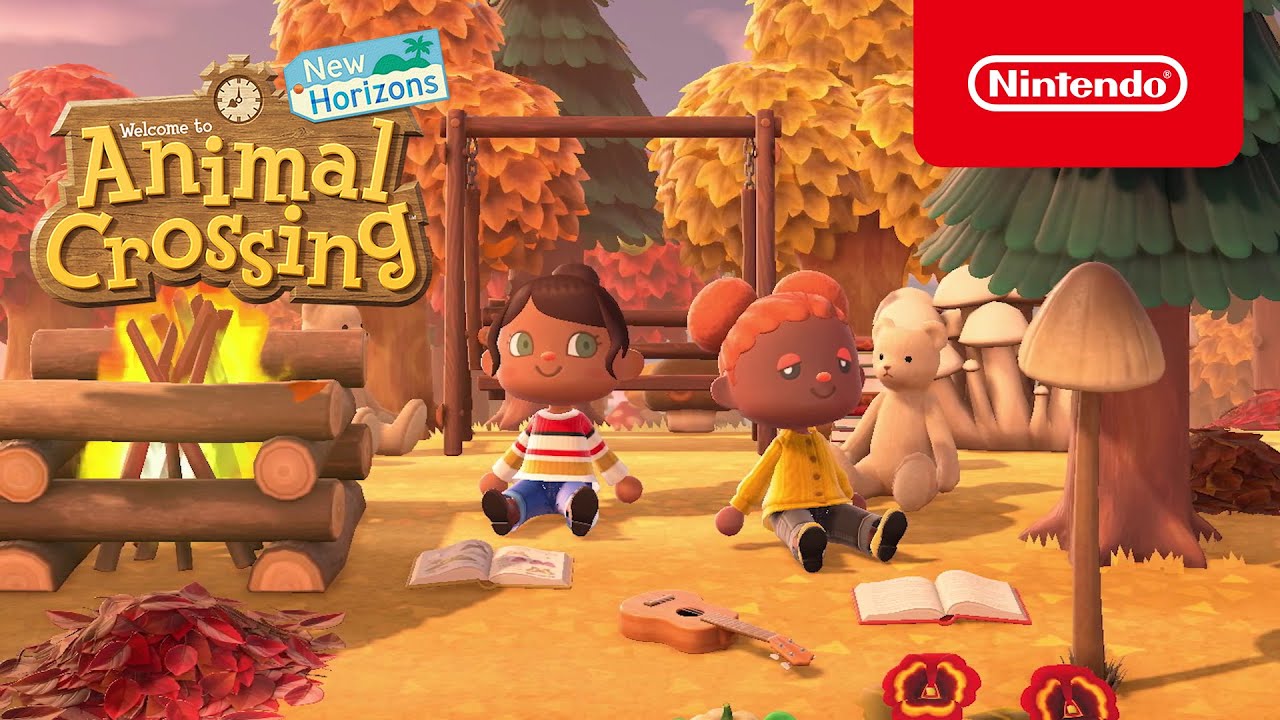 It sounds like fun but the execution is everything.

However, many established gamers and influencers are openly dismissive of metaverses and NFTs for a few reasons, namely because freemium games sacrifice quite a bit in terms of core gameplay which makes for tedious experiences (e.g., you spend a lot of time in menus managing instead of playing the game, the grinding required to progress is excessive and repetitive, etc.)

And a lot of it is simply just because the model has changed from our heydays of playing Mario Kart 64 – at the society level, new ways of doing things are always met with resistance and take time for the masses to adopt. 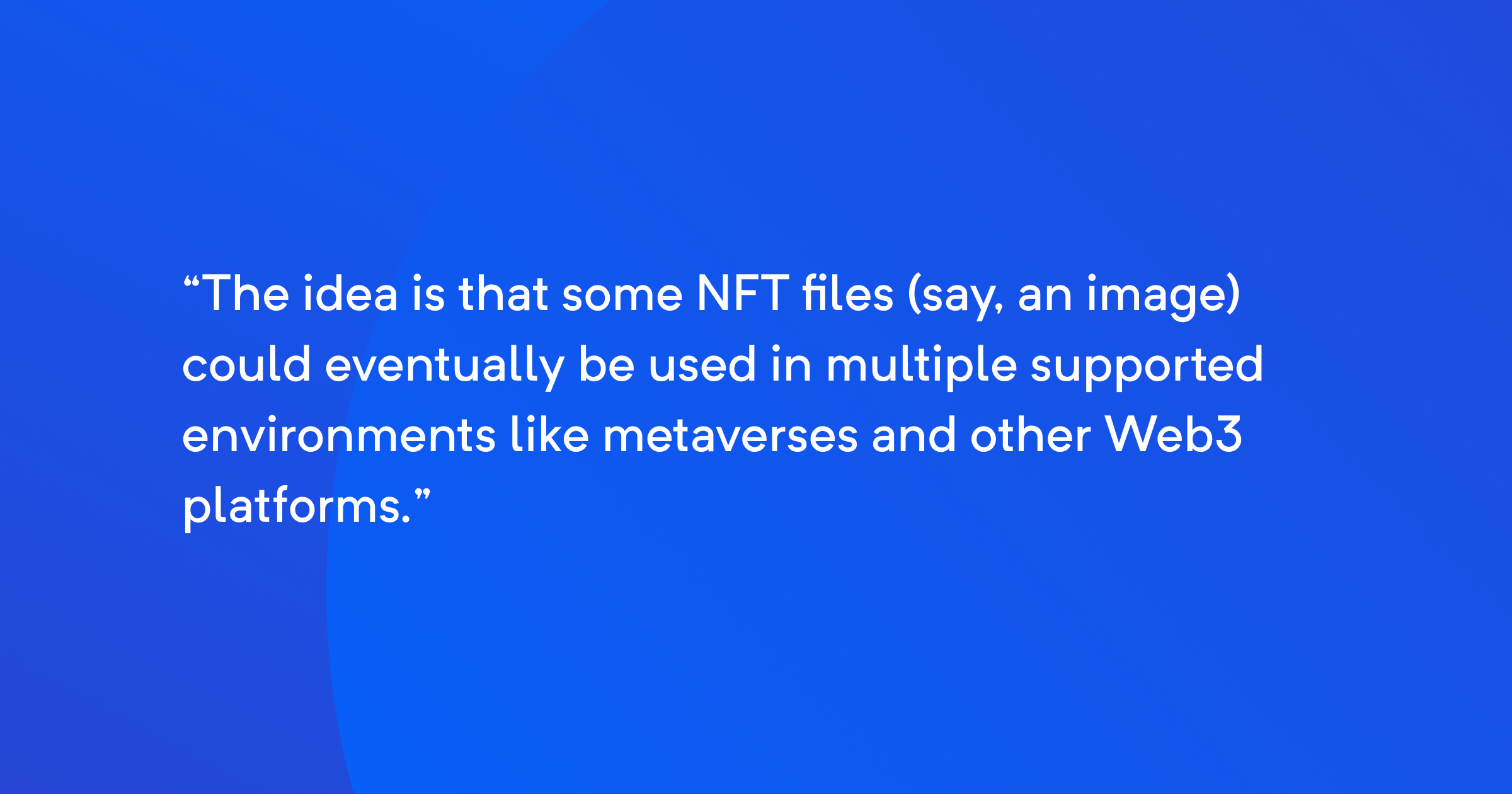 Once the hype goes away, the market changes

Currently, hype is what’s driving a lot of NFT prices – if you’re a digital artist that sells products on Shutterstock, Etsy, and DeviantArt, there’s no reason not to try selling your art as NFTs on sites like OpenSea.

As an artist, you can set much higher price points for your art and as we can see from the success of NFT marketplace OpenSea that’s now worth $13.3 billion.

As a creator or trader, you could make a fortune here. | Source: OpenSea

Though an NFT provides buyers ownership, they’re still just files at their core. Eventually, the fact that something is an NFT will take a back seat to the value of the underlying product and the market will eventually drive prices down.

A good example of this is the selling of Twitter’s first Tweet from co-founder, Jack Dorsey, which he initially sold for $2.9 million.

Jack Dorsey literally just took a screenshot of this, minted it as an NFT, then put it up for sale. Source: Twitter

Though it initially sold for millions, the tweet’s value only influenced by the market’s perception of its actual worth (like most items) which has caused issues for the current owner, Sina Estavi.

His plans for selling the tweet and donating upwards of $25 million to an undisclosed charity completely unraveled when the highest bid for the NFT tweet went for a whopping $280.

How different businesses can use NFTs in the future

It’s easy to see NFTs as just a commodity that has a trading value at the moment because, well, that’s exactly what’s happening right now and also the most approachable angle for media coverage.

The other way they provide value is due to the technical design of the NFT and blockchains that support them: they’re immutable which means files stored as NFTs on a blockchain can’t be altered, deleted, or modified without a global “attack” that either destroys or compromises the blockchain.

This means that businesses can instead leverage this unique trait to accomplish all kinds of different things. 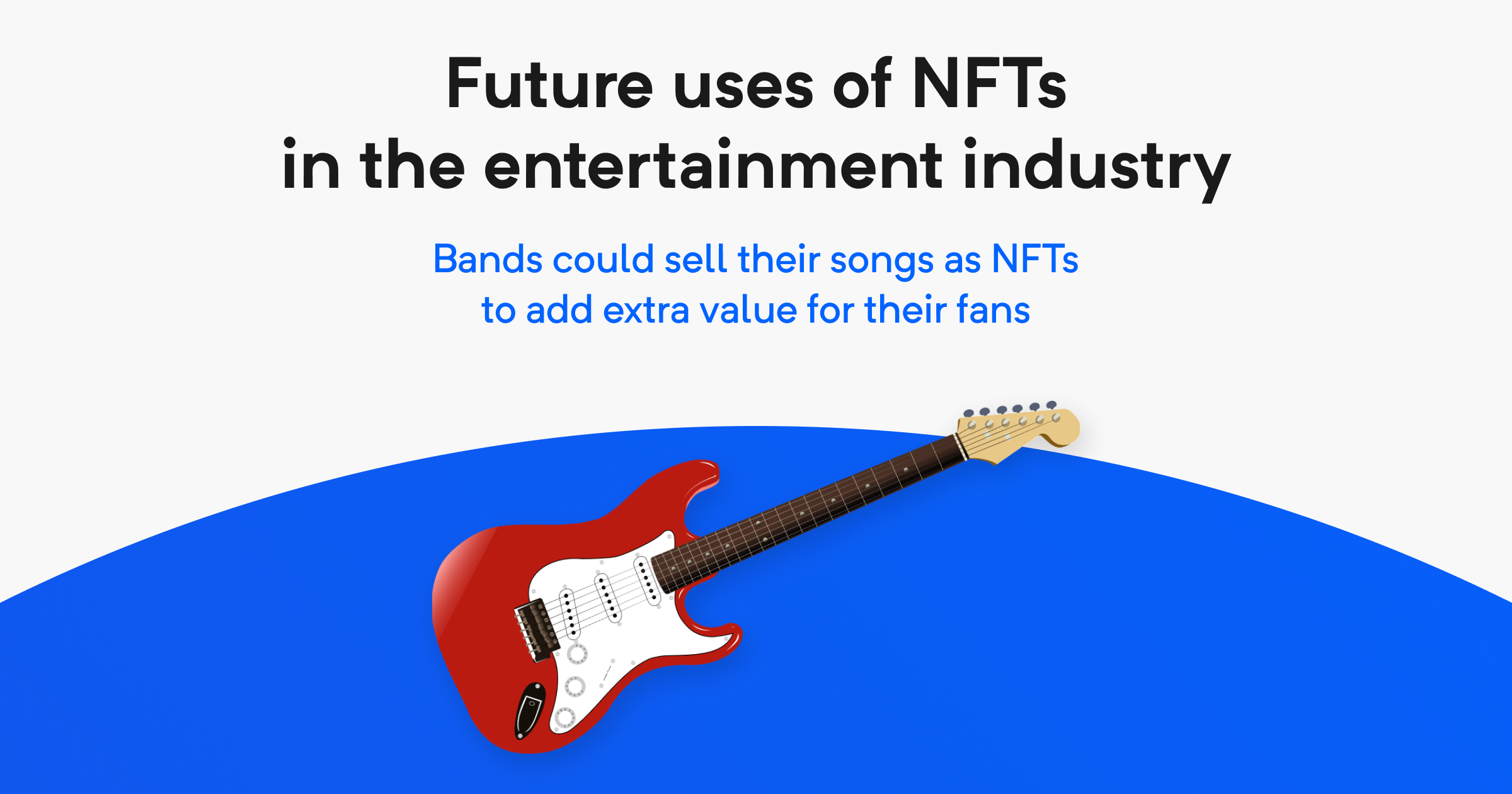 It’s certainly in the realm of possibilities and something that’s now becoming mainstream with notable bands like Kings of Leon releasing music content along with additional perks as an NFTs. 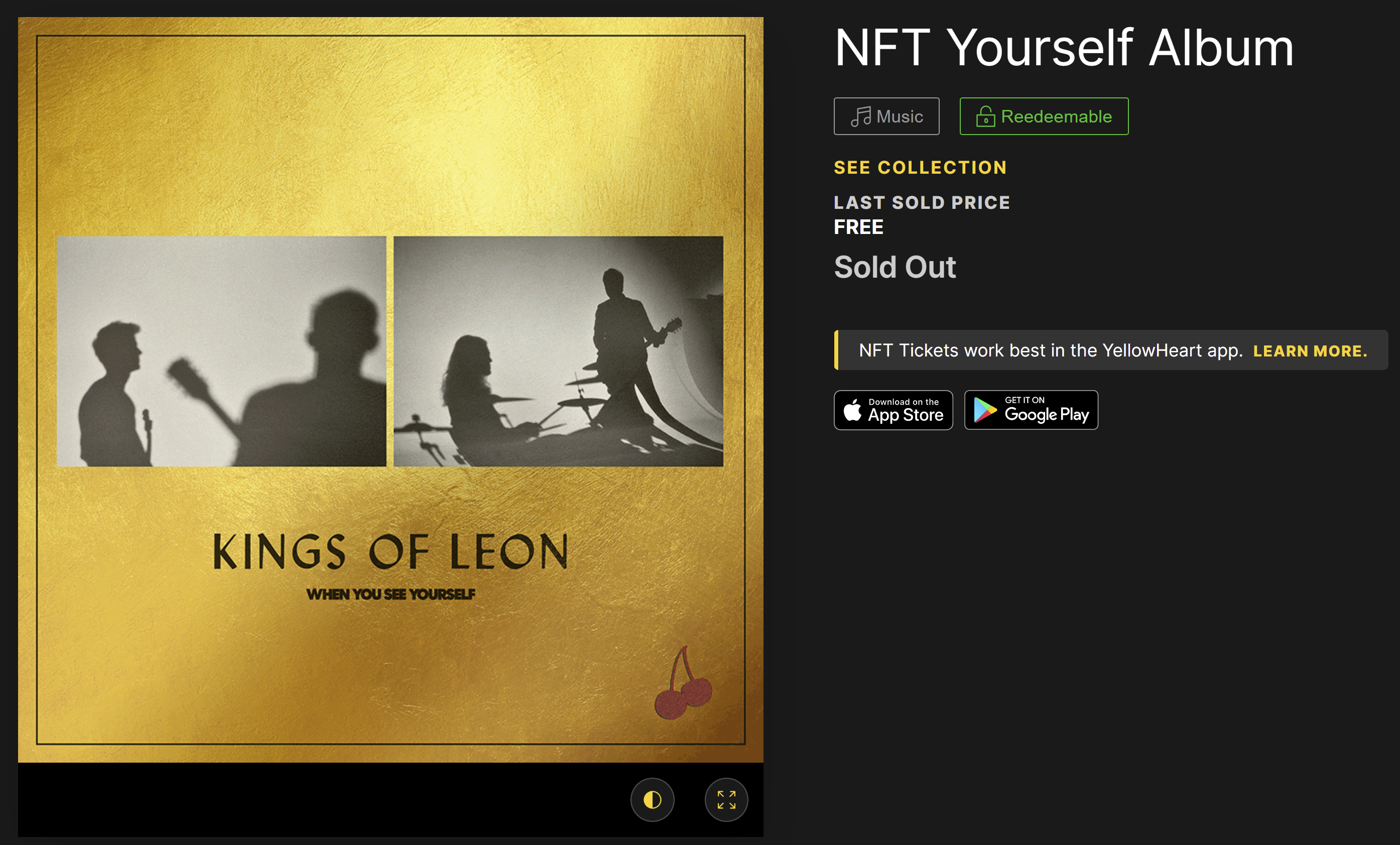 YellowHeart has all kinds of neat stuff. | Source: YellowHeart

The advantage here is bands can also provide their fans additional perks when selling on NFT marketplaces like YellowHeart such as here where they offered a limited edition vinyl copy of the When You See Yourself album. 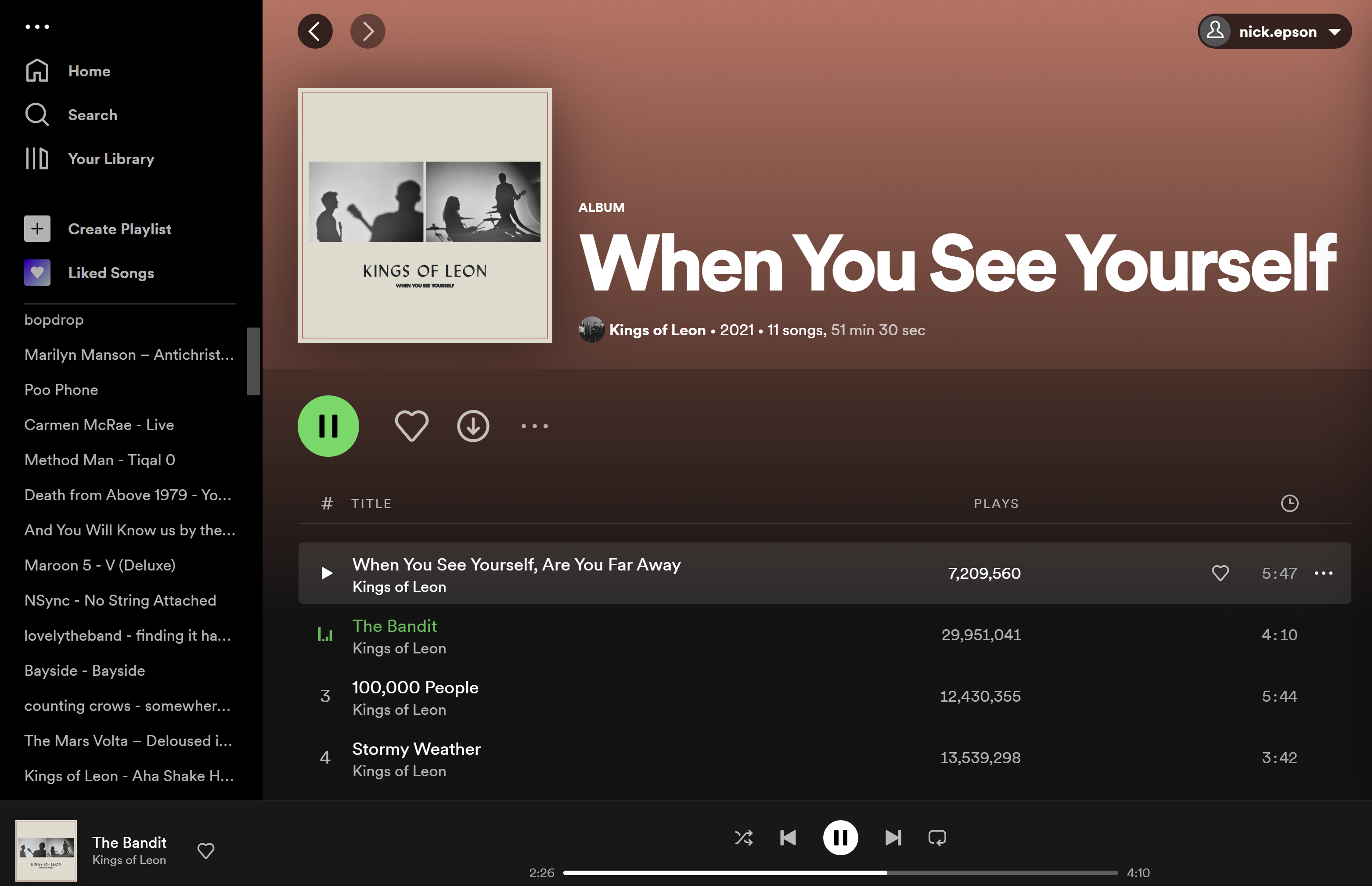 It’s chill. Check it out.

Of course, it was also released on other platforms where people can freely listen like any other album.

There’s a ton of use for NFTs in entertainment as it affords groups like bands the ability to attach additional value to items (e.g., the vinyl album in the Kings of Leon example, a concert ticket, etc.) in a way that can be controlled.

We reached out to our friend and co-founder of Decentology, Nik Kalyani, to hear his thoughts on the usefulness of NFTs, right now, and this is what he had to say: 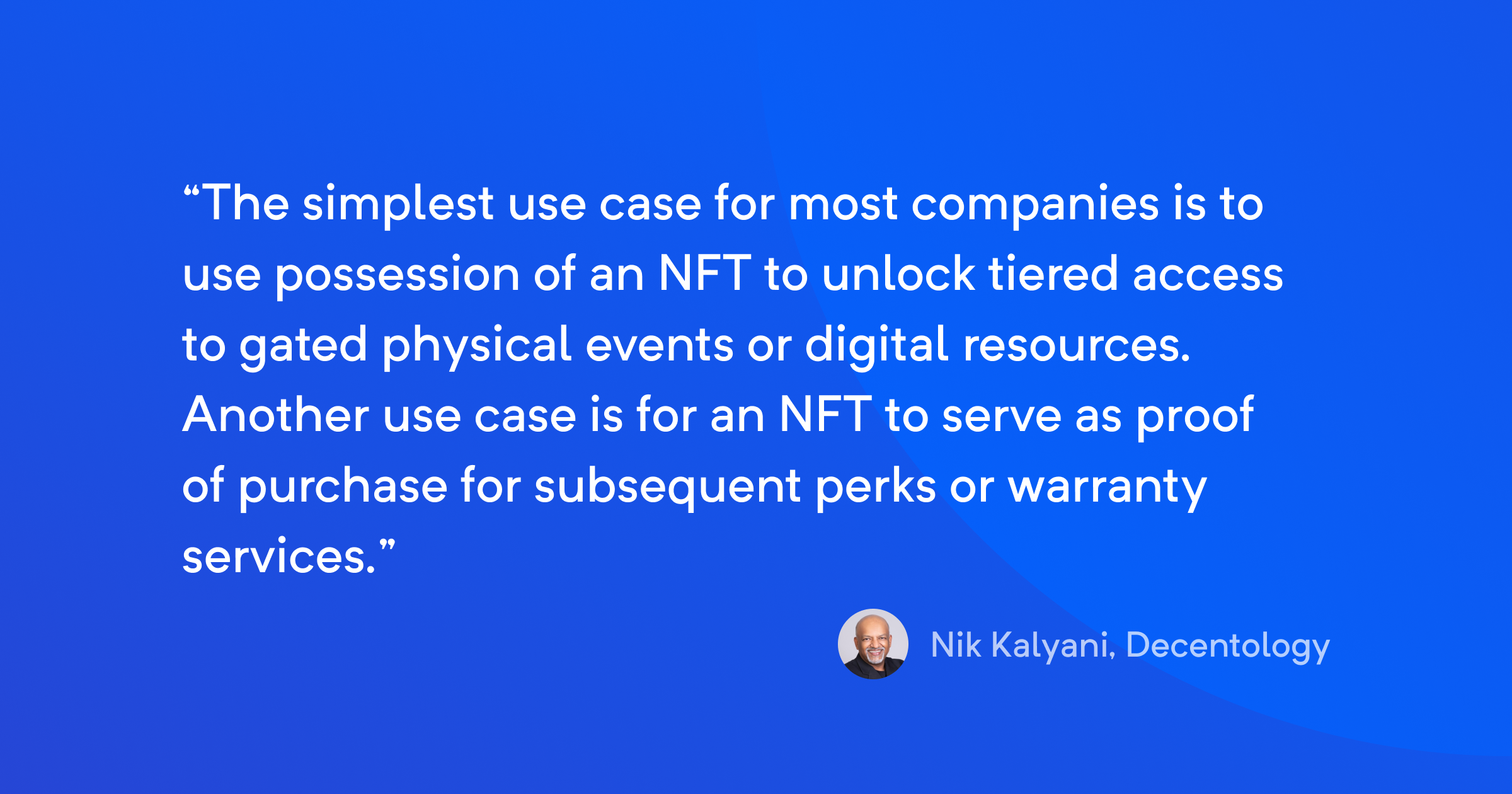 Essentially, this is exactly what was done with NFT Yourself collection from Kings of Leon, a trend we’ll soon see take hold in music and far beyond.

The possibilities here are quite expansive and once the hype dies down, we’ll start to see more practical uses for NFTs than people trading low-utility JPEGs for a profit.

Brands like Starbucks can offer NFTs to expand their reach

It’s important to acknowledge that there is some fear of platforms becoming overly corporate and becoming a playground for ads or worse, political lobbying. 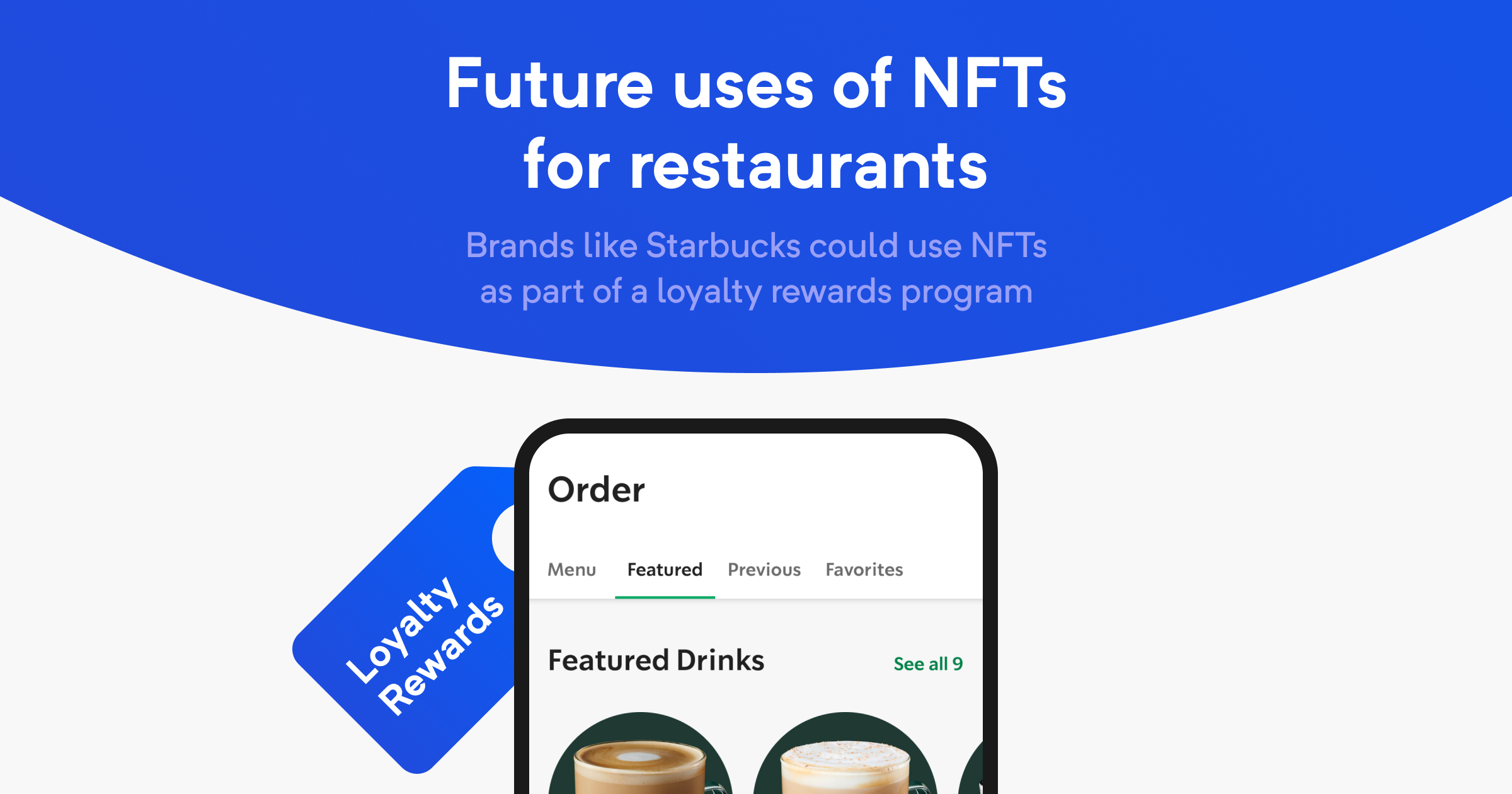 With platforms like The Sandbox that we previously touched on, the doors are wide open to businesses that can and do use the platform to extend their brand.

And while some prophesize that the metaverse is the starting point for society to decay into something like we see in Mike Judge’s Idiocracy, we know that the market will eventually weed out what it doesn’t want. 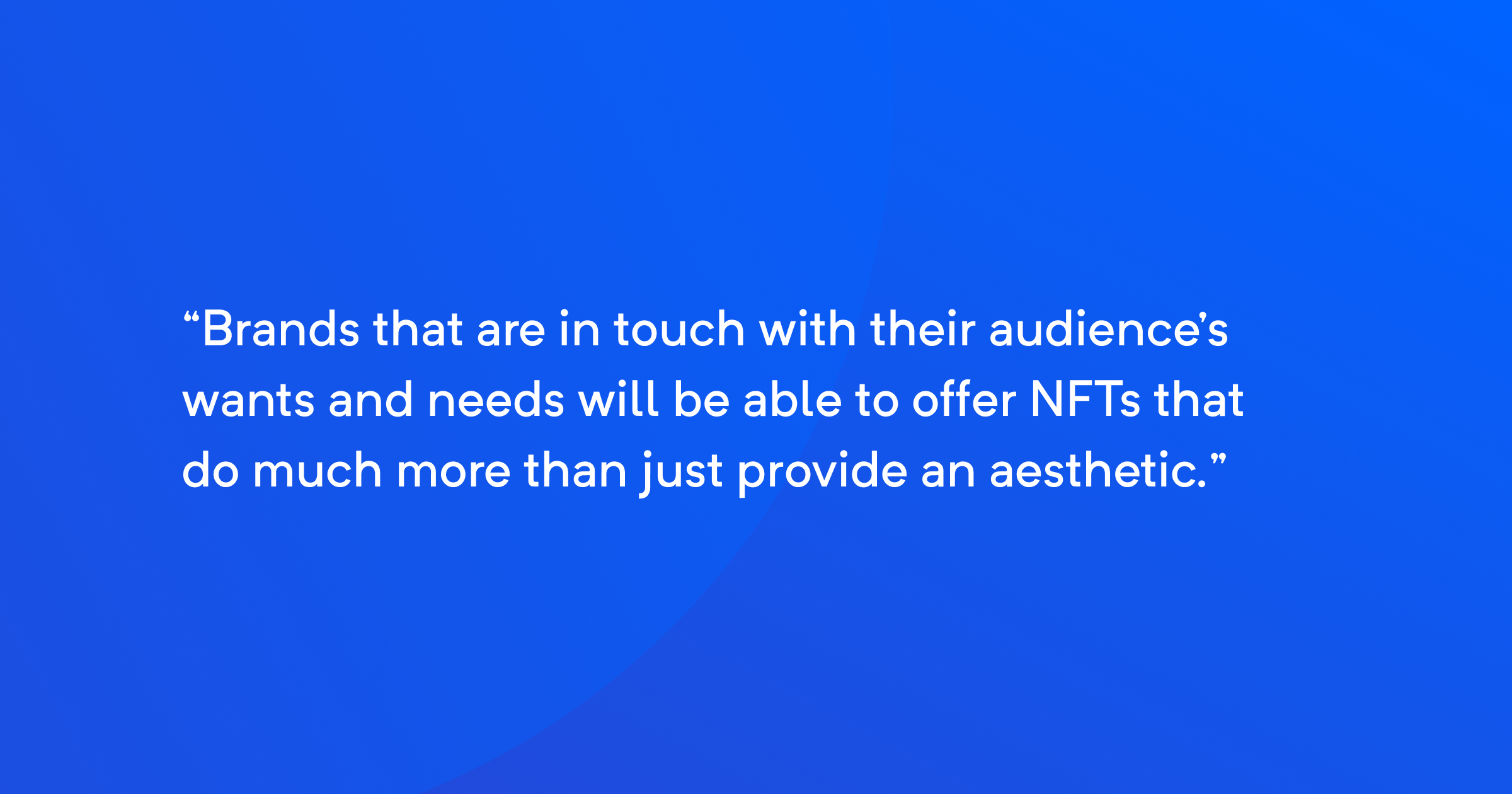 Soon, restaurants will adopt NFTs and use them to provide unique benefits for their users.  For example, some customer CRMs will begin to incorporate NFTs but more notably will be how loyalty rewards programs will be able to capitalize on the technology – though it’s a bit overkill for this exact moment, businesses could offer coupons as NFTs.

While potentially expensive right now because of gas prices on the Ethereum blockchain, among other reasons, this could eventually be the norm as it would eliminate unauthorized usage (e.g., duplications for one-time use offers) which eliminates risks when providing high-value rewards.

More specifically, Starbucks could integrate a kind of solution built with the likes of Polygon into their app that distributes, say, an NFT redeemable for a free venti Frappuccino to the first 100K users who connect a compatible crypto wallet into their account through a mobile app.

For now, brands that choose to incorporate this technology into their business will need to keep close watch to see what happens, try other stuff when a hypothesis doesn’t pan out, and expand the program around what works.

Definitely – not everything will be as awesome as the previous hypothetical Starbucks example.

Like anything else, it’ll be important for consumers to stay informed and spend money on platforms that best fit their needs.

And too, some people would really love to see this kind of corporate presence in the right environments – imagine a battle-royal game where you can lob grenades that looks like Starbucks drinks or liters of Coca-Cola.

Hear me out: Dark Souls but with NFTs

The Dark Souls series by Japanese developer FromSoftware is embraced by gamers for its challenging gameplay, clever level design, as well as diverse armaments and items that provide substantial depth to combat in addition to lore about the universe. 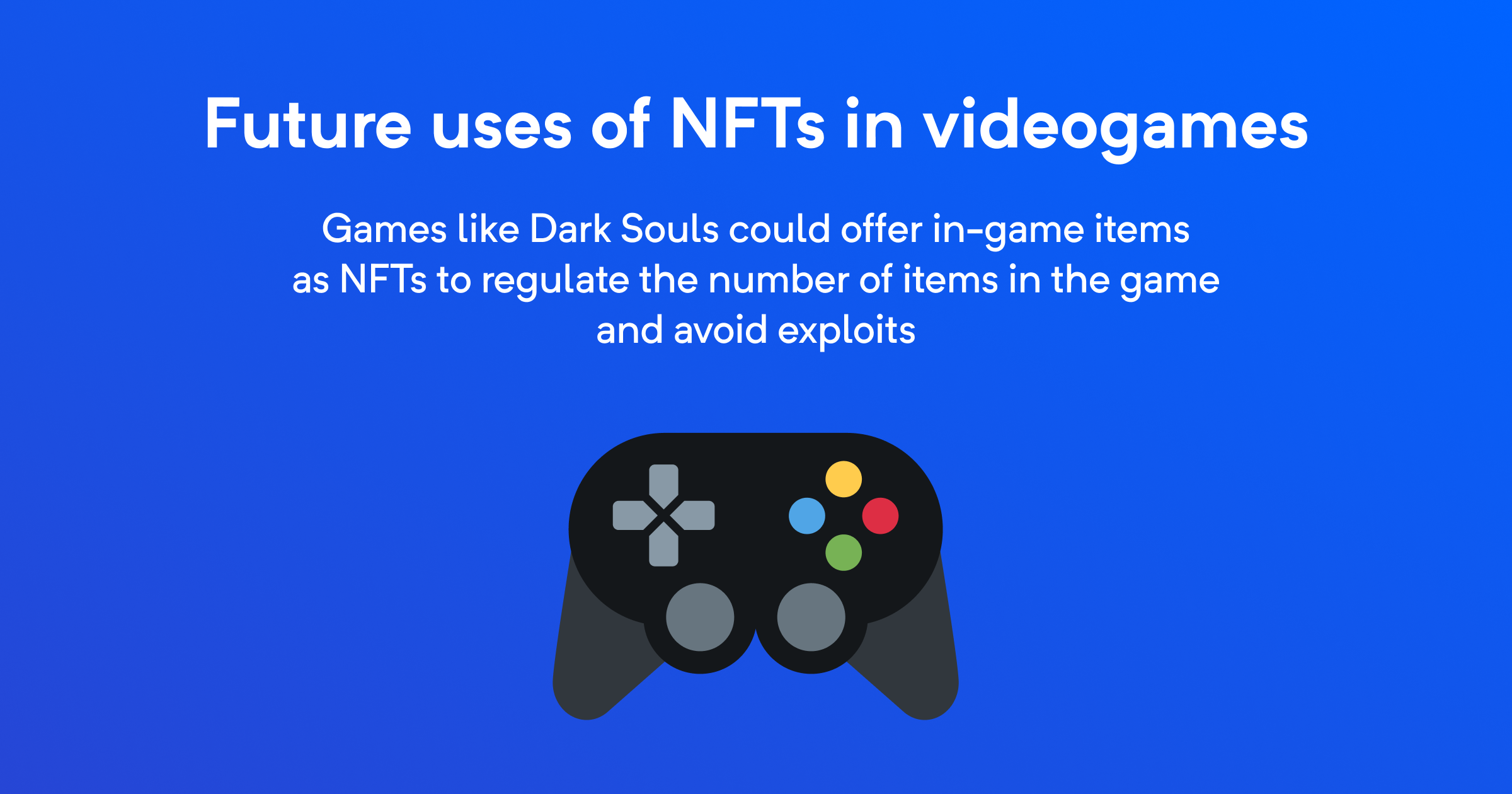 Now that Elden Ring has made a splash as the best-selling game in the US thus far in 2022 (now upwards of 13 million copies globally) people are speculating on what comes next.

Though it’s almost certainly not in the cards for current titles on the market like Elden Ring, there is an attractive opportunity to offer a substantial overhaul to new titles by implementing NFTs for in-game items, characters, and beyond.

Using NFTs minted by the developer for in-game items would regulate the number of items in the game and essentially remove the ability to generate items through modifications and exploits.

For example, in the Dark Souls series, you could join with a friend in co-op, drop your rarest gear, then reload your game from a backup and still have all your items.

In an environment that relies on NFTs for inventory items (rather than just an instance on the game’s local database), these items would need to be traded through a blockchain, thus eliminating this and other tricks people use to circumvent the challenge or time investment required to obtain certain items.

It would also bring something entirely new by offering a limited number of unique equipment and items to be earned through events that are only issued once a player has verifiably completed a challenge or won a competition.

Like many games, players look for ways to hold competitions and offer prizes for Elden Ring but with all the inconsistencies because of PC mods and console exploits, it’s up to communities that hold these kinds of events to closely regulate them to ensure the playing field is as level as possible.

A Web3 running environment in conjunction with NFTs would also work to prevent players from cheesing their way through single-player games which could open the doors for a new, stronger rewards system for completing tasks as well as stop cheating from problematic achievement hunters that dilute the percentage of players who authentically accomplish a task.

Gaming is just like anything else: competitive players want stuff that others don’t have, don’t have the capacity to earn, the most of something, or the best score.

Like exotic cars, one-of-a-kind fashion items, and other high-value, scarce objects in the real world, having these kinds of items available in metaverses and games will motivate people to earn them. When executed properly, there is also a significant opportunity to generate extra revenue and allow users to earn as well.

Though we probably won’t see a “NFT Dark Souls” series for some time, FromSoftware director Hidetaka Miyazaki stated that publisher Bandai Namco is planning on “expanding the [Elden Ring] brand beyond the game itself and into everyone’s daily life” which most likely refers to some kind of inclusion of the IP in their upcoming metaverse.

We are here to support the upcoming metaverses

Blockchain offers some incredible opportunities for businesses that can ethically capitalize on the technology and provide users with valuable offerings.

We’re here to help businesses that are looking for help plan, design, and develop their upcoming blockchain and metaverse ideas. 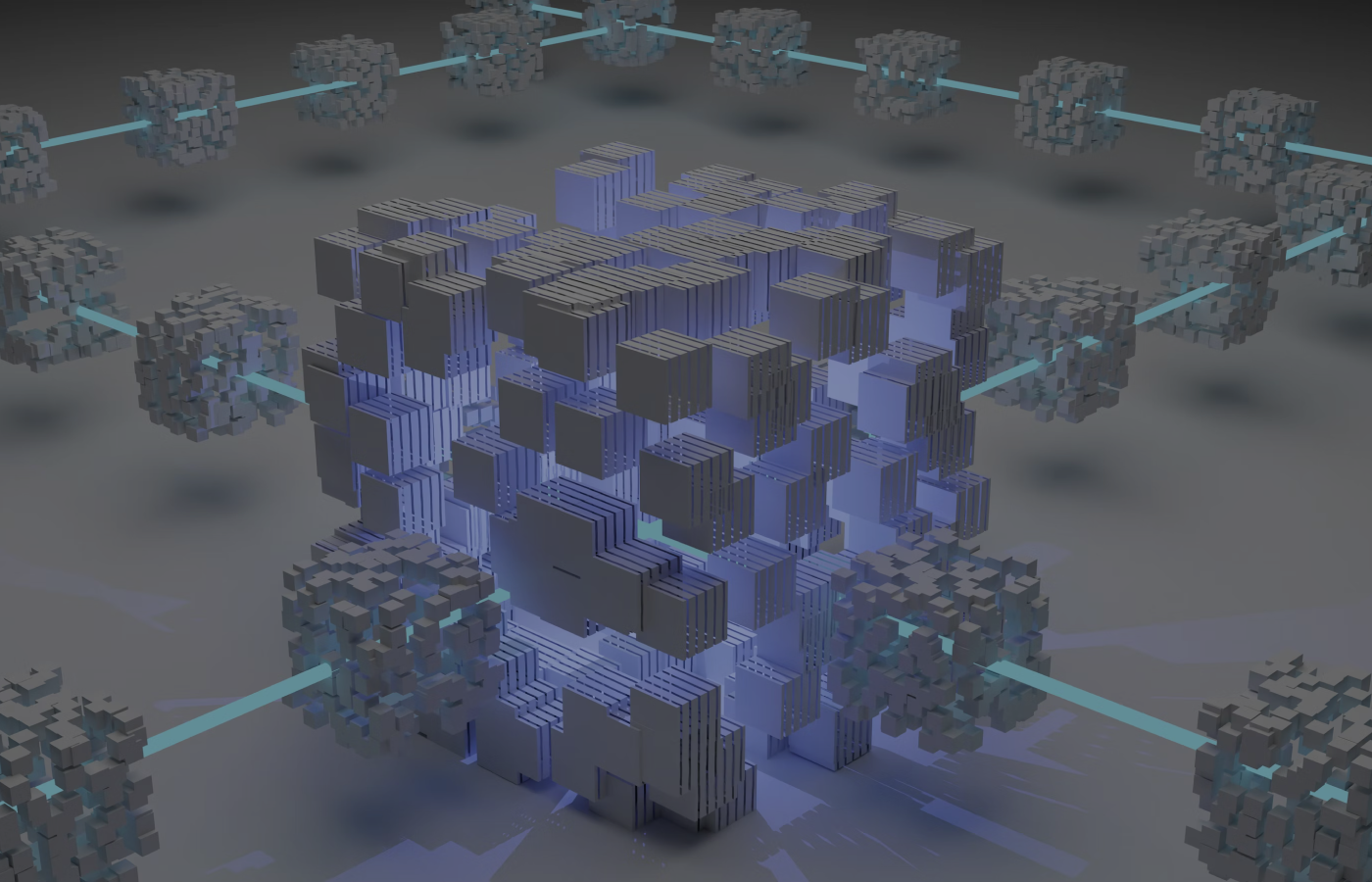 Blockchain and all that comes with Web3 territory is an exciting and confusing territory. Because the world is moving in this direction, it’s helpful for businesses to see the big…

How to Secure a Smart Contract through Solidity Visibility Modifiers?

In programming, modifiers are keywords that enable you to restrict access to a piece of code, be it a class, function or other data construct.  Though there are several programming…

Darkside of the Blockchain: What Could Go Wrong?

Ever since the discovery of fire, it’s served as the cornerstone for virtually every advancement that would follow – blockchain, like fire, is similar in the sense that it can…