Blockchain and related technologies like NFTs are looking to be one of these “once-an-era developments” that will be responsible for reshaping much of our digital and physical world.

Like other complex systems working beneath the surface of our digital products, they’re not too well understood by the masses or entrepreneurs outside of certain circles.

So we’re going to examine a few NFT uses to demonstrate how they’re used in a few platforms right now and how they’ll be used in the future.

1. The many faces of the NFT: a look at the Axie Infinity platform

One thing that blockchains and NFTs make possible are unique items in digital worlds.

For example, a game could use blockchain for in-game items to make at least certain items one-of-a-kind. This would essentially make it impossible for players to dupe finite items through some exploit, solidifying exclusivity and thus creating real-world value in the right environments. 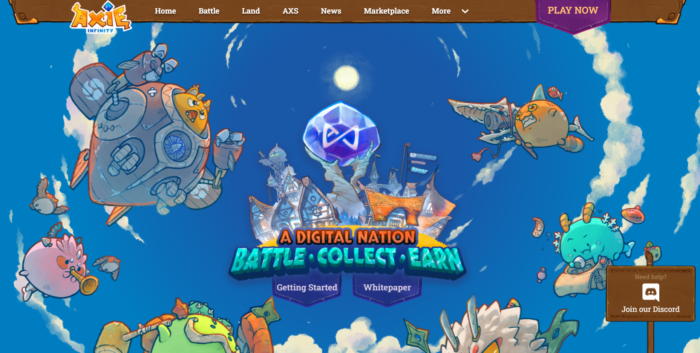 The Axie Infinity game pictured above is a platform where users raise and battle little creatures called Axies.

The formula sounds familiar but the application of blockchain for the Axies makes these creatures one-of-a-kind. It connects with a specific wallet service called the Ronin Wallet where users store things like real-world cryptocurrencies such as AXS (Axie Infinity Shard) and SLP (Smooth Love Potion), both of which are used as in-game currencies alongside NFT Axie characters which vary in value.

Founding members of the Axie team met while playing the game CryptoKitties, which used a similar concept and similar gaming style (truthfully, it’s about the same for most NFT games currently on the market.)

By completing certain activities like PvP (player-versus-player) battles and breeding your Axies, you can earn additional currency as well as generate new tokens and Axies on the blockchain, all of which can be traded out for fiat currency on a supported trading platform.

Watch the video below for an overview of the Axie Infinity platform:

It’s a win-win for companies that can pull it off.

In Axie Infinity, the gameplay is both beneficial to the platform itself because of the nature of the blockchain and the user since actions can generate AXS that have real-world value as well as breed then sell Axies on the marketplace, pictured below.

Keep in mind, this is more complex than just collecting money from a product that you’re selling, especially when a cryptocurrency is tethered into the process. Here, you have to construct a healthy economy, not just one that’s profitable for any one entity (e.g., your business) connected to the platform.

A few hypothetical use-cases for NFTs besides art

Though NFTs will help by serving as a powerful new way to catalog and distribute “certificates of authenticity” for various objects, real and digital, they will have some other unique uses as well.

Here are a couple of use cases you’ll (hopefully) see in the near future.

2. Inventory items in games can truly be one-of-a-kind and finite

Though many mainstream games produce unique items with different “rolls” (e.g., a stat value, a buff, etc.) one-of-a-kind items for use within a game universe haven’t been possible as knowledgeable users can almost always exploit a local or even server-based database to either alter, duplicate, or remove these items.

An inventory system that uses blockchain could retain each instance of certain items so that there is truly only a limited number in circulation throughout a game’s ecosystem.

As seen above, NFTs are used by the game Gods Unchained, a game created by a former director of the digital adaption of Magic: The Gathering known as Magic: The Gathering Arena. True scarcity works to generate value in the real world, depending on factors like the item’s in-game usefulness, and of course, the game’s popularity.

It’s much the same as with rare, physical Magic: The Gathering Cards or really, any collector’s item. This means NFTs will add a whole new air of realism to trading when hard-to-come items are truly unique and finite across the entire game ecosystem.

3. An NFT can be a virtual property

A piece of data stored on the blockchain can be just about anything from a financial document, a trippy GIF, or even a title to a virtual deed. Similar to the game items described, upcoming metaverses that provide a multiuser, 3D-environments might want to offer a “piece” of the environment to a user, rather than an object like a sweet, legendary sword or a neat object for your in-world home.

Offering an environment where users can “own” areas requires a system that can’t be tampered with which makes NFTs a novel, new solution for such scenarios. NFTs could be used in a game world to create a virtual deed system that could assign a user ownership of anything from a structure to a certain plot of area.

Rather than rely on a centralized database to constantly validate everything and ensure rules aren’t being broken, this would be handled by the blockchain which users can’t manipulate.

The Sandbox game pictured above that we discussed in our post on play-to-earn economies provides LAND which can be purchased using the game’s currency SAND or using another method when purchasing directly from another user.

Depending on mobility options available to in-game avatars (e.g., fast travel) the physical location in a virtual space will have substantial impact on a “land parcel’s value. For example, a shop in a high traffic area will likely get more traffic than a location off the beaten path. In the Sandbox, they use the analogy that having a nearby teleporter can be likened to “having a subway station next to your place of business.”

4. NFTs could help track valuable objects from owner to owner like vehicles

Keeping track of the owner from the first point of sale is simple, but what about everything after?

Though it would be overkill to use blockchain for every single item we buy and might resell later, it would be useful in replacing systems like our fragmented vehicle titling system in the US – a blockchain system that’s accessible to the general public would eventually remove the need and hassle that goes along with the current system that wholly relies on paper titles and siloed DMV databases spread across the country.

We know how to make blockchain shine for your solution

Blockchain is great for its ability to securely decentralize information in a way that completely transforms the possibilities of what we can do with the data.

As we discussed, NFTs will play a major role in acting as digital “certificates of authenticity” and will further open the doors for unique virtual experiences by facilitating the creation and usage of one-of-a-kind objects.

The possibilities are just now coming to light so to learn more or discuss if blockchain is the right technology for your project, get in touch with us today!

Darkside of the Blockchain: What Could Go Wrong?

Ever since the discovery of fire, it’s served as the cornerstone for virtually every advancement that would follow – blockchain, like fire, is similar in the sense that it can…