The new Unreal Engine 5 from Epic Games is still in early access but it will soon become a staple platform for developing incredibly detailed – and efficient! – 3D (and 2D) environments for not just games, but all kinds of software.

How a program renders its graphics is something that’s historically been viewed as a kind of niche knowledge, but now it’s becoming much more important for those beyond just the folks in Hollywood and big game companies.

Most apps don’t need to rely on game engines or sophisticated graphics systems to do a majority of things we presently use apps for, like order food, find love, move money between accounts, and other tasks of this nature, because it’s overkill.

Though high-end rendering has typically been more of a niche requirement for projects in film, gaming, and scientific pursuits like engineering, it’s becoming more commonplace, a trend that will continue as we continue to push boundaries further in every respect.

Unreal Engine is technically a game engine which is a special kind of software framework that provides a comprehensive set of tools for developers to create and manipulate imagery, sound, and more in 3D and 2D environments – basically, it’s where developers “code” your game.

It includes tools like a rendering engine that draws everything you see on the screen, tools for animating the polygons you draw (we’ll get to what this means shortly), an intelligent system for applying textures in real-time across potentially billions of surfaces, a physics engine for creating movement and detecting collisions, dynamic sound tools that integrate with everything else, and so much more. 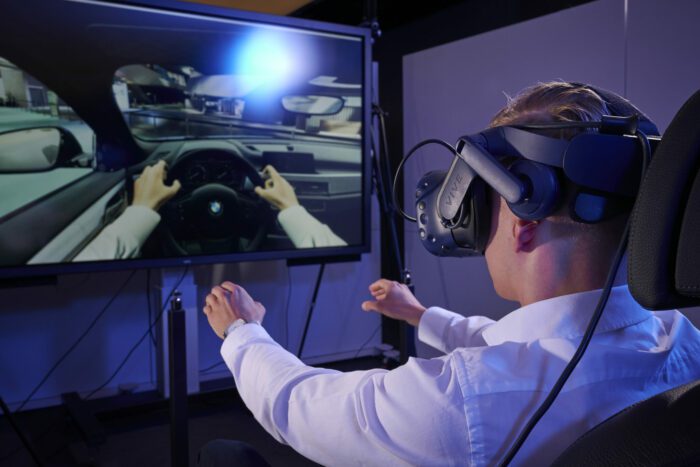 Powerful rendering in addition to other valuable features is why gaming companies use gaming engines but they have their place in other areas that include automotive design with manufacturers like BMW using Unreal Engine to develop and test vehicles and even model their assembly line!

NASA is another notable non-gaming company that uses the platform to develop realistic training simulations for astronauts.

Just as Unreal Engine and other gaming engines can be used to build great console games like the Final Fantasy VII: Remake and many mobile games, the utility for gaming engines is becoming much broader. 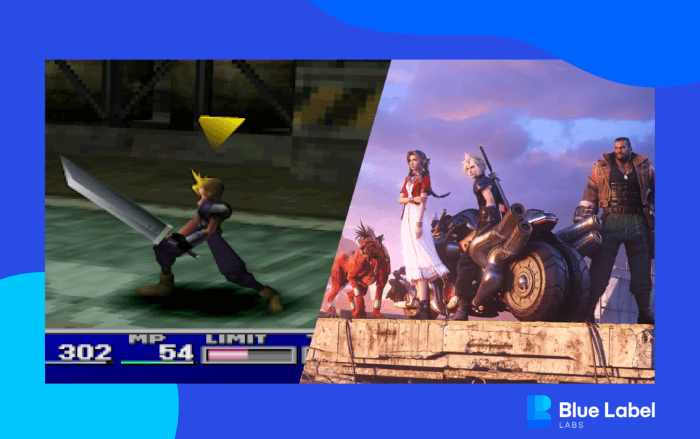 For example, there’s an immense utility for medical imaging that could potentially disrupt how we look at peoples’ guts and bones around the globe. Imagine being able to create a 3D model of someone’s insides on the fly that’s not only visually accurate but also “behaves” in a biologically consistent manner?

Such a system could offer views that would allow doctors to identify and treat people much faster than ever before, especially when you consider how AI in healthcare is already making strides in the industry.

Imagine: in a few years you might go to the doctor to get a handle on some colon polyps and they put on some computerized goggles, pick up an Xbox controller, then tell you not to worry because they have the platinum trophy in this game.

An introduction to how rendering works

To understand the value that some of the new features Unreal Engine 5 offers, we need to touch on how rendering works at a fundamental level. Bear in mind it’s a dense subject so we can only scratch the surface.

Underneath everything you see in a 3D environment are a bunch of lines, vectors, and polygons that form the “bones” of everything from structures, objects, characters, and so on. Historically, triangles have been used for several reasons such as the fact that it’s the smallest polygon, three points will always create a plane, and cannot be split into anything other than triangles. Using quadrilaterals (or “quads”) is popular too as it offers certain advantages but that’s a debate for folks who create works of art in these systems.

Each “line” of the polygon is actually a vector which essentially offers more data – that is, it uses displacement which also has direction and thus, magnitude – essential to both the physics portions of the gaming engine (i.e., what makes stuff move around) and the rendering portions. Here, calculations are performed constantly to, among many other reasons, ensure perspective is correct while the user moves through and looks around an environment. 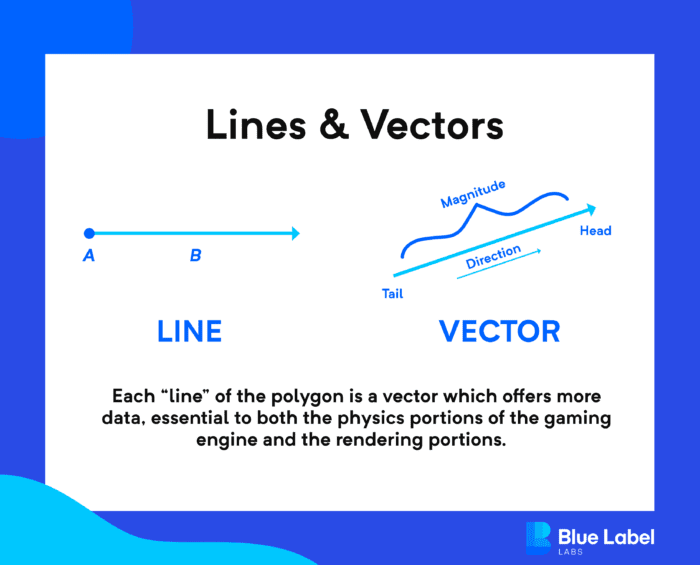 Though you can technically make just about anything with enough triangles or quads, there’s a hard limit on how many billions points a system can accomodate and thus, how many polygons it can functionally draw. Factor in that this process of drawing has to share resources with other processes like processing data-rich images used in textures, handling inputs in real-time, detecting collisisions then executing subsequent routines accordingly… and so much more.

Game’s and software’s graphical capabilities have always been limited by the hardware of their era. While there are some workarounds like the brilliant backstory of the original Crash Bandicoot for the PlayStation, there’s a literal physical cap.

The story above explains how they “hacked” the system to essentially borrow dedicated but unused system resources like physical memory to create game animations that shouldn’t have been possible for that time. Historically, graphics and responsive gameplay inevitably top out each generation but with Unreal Engine 5, new innovations will uniquely equip this generation equipped for unparalleled new developments such that it’s a little unclear as to exactly how much juice can actually be squeezed from this exotic, new fruit.

Though Unreal Engine 5 is still in early access mode, plenty of big-name developers are already using the platform to build upcoming game titles. So, let’s take a look at what makes Unreal Engine 5 brim with potential.

Right now, The Matrix Awakens is the first widely-accessible piece of content that attempts to tap the potential of Unreal Engine 5 to demonstrate the full scope of the platform’s capabilities. During the demo’s introduction, Keanu Reeves and Carrie-Anne Moss do a great job explaining the significance of its capabilities to the average consumer through an interactive demo.

Above is gameplay footage I captured on PS5 while strolling through the Matrix’s open-world city. Most of the video is just sightseeing (there are interesting facts to find about the city as well as “night mode” toggle at certain points) but the beginning shows, among other things, what’s beneath the textures. You get a glimpse of the surfaces, that is, underlying networks of sometimes pixel-sized polygons that are the foundation of the game environment and all the objects in it.

The different colorful surfaces you see are logical groups of triangle clusters which allows designers to assign a “material property” that will give that area (and the texture placed on top of the surface) qualities for visual qualities, physical properties, and even sound, among others.

By accommodating additional data that reflects various physical properties, visualization, sounds, and movement, more realistic (or complex, depending on the visual style) environments and behaviors can be created.

The Audio Mixer audio-renderer that was introduced with Unreal Engine 4 will continue to act as the staple for Unreal Engine 5, offering a variety of improvements for everything sound from simply playing media to constructing acoustically accurate environments using tools like convolution reverb and ambisonics rendering alongside other tools.

It’s all possible thanks to the Nanite virtualized geometry system

The reason we went on about lines and shapes is because of how important the process is to drawing and animating environments as well as to explain the reasons behind its mechanical limitations.

Unreal Engine 5 now offers a remarkable new system that “virtualizes” geometry known as Nanite that essentially offloads much of the rendering and uses a more logical process for loading and rendering poly meshes based on a few parameters the presenter briefly discusses in the first few minutes of the above video.

Historically, a project’s “poly counts” at any given time is a make-or-break value but now, this limitation essentially goes away (with some exceptions) when using Nanite in an Unreal Engine 5 project.

By removing one of the most burdensome processes of rendering and animation, the amount of detail that can be processed and displayed in real-time is astonishing. After developers, animators, designers, and scientists around the world learn how to truly exploit the system for all it’s worth, we’ll see projects come to life that will take visuals and audio to an unprecedented level.

For a more detailed explanation of Unreal Engine 5 and to see some of the above features in action, watch the video below which comes straight from the Unreal Engine team.

Are you ready to push the boundaries of software visuals and sound?

The new Unreal Engine 5 will usher in an era of visual and audio advancements in our software that will extend far beyond just games.

By understanding a bit about how rendering works in a game or app, it’s not hard to imagine why some of the platform’s amazing new features like Nanite are incredibly valuable to not only the ambitious game developer but anyone and everyone who plans to offer their users a robust 3D environment.

Wanna learn about other sweet things in the software world? Plugin your email here below and we’ll a monthly roundup of favorite content each month