Ordering a meal from Chipotle is always a good decision as not only is their food delicious, they do a few other things quite well. The franchise is committed to sourcing its products as ethically as possible – while avocados don’t make the cut, most of their food and operations are “green” and they care enough about their employee’s well-being to make strides in offering better wages. Furthermore, they really nail the mobile experience and it’s largely thanks to the DoorDash API.

Those looking to build a mobile ordering app with DoorDash or custom systems like it have a ton of options at their disposal. Here, we’re going to explain what the DoorDash platform can provide to businesses and use Chipotle as an example to help provide some context.

What is the DoorDash API and why is it valuable?

Though we’ve defined API (Application Programming Interface) in the past, it bears repeating: from a high-level perspective, an API is a kind of liaison that allows different systems to securely share data and certain resources. For something familiar like Uber, the APIs are what allows the app on your phone to interact with the platform, for example, when requesting a ride or watching the map as the driver heads toward your location. Developers use APIs to connect systems like the frontend (i.e. the app itself) and backend services such as DoorDash to integrate (and build upon) features like menu system, delivery component, and much more.

We recently covered a couple of other systems under the lens of ‘customizable loyalty reward programs’ – it’s important to note that services like LevelUp from Grubhub also offer a similar set of comprehensive tools for building restaurant apps, though we roped it in with platforms that are mostly geared toward just the loyalty aspect. The value here is that either system essentially provides just about everything you need to quickly and inexpensively – at least, as far as app development goes – build robust apps as well as enjoy additional benefits like access to a “fleet” of delivery drivers from either network.

As such, these solutions are ideal for restaurants that would like to build a custom mobile ordering solution without the extensive work required to build similar solutions from scratch. Plus, they circumvent a large majority of the logistics required for a team of internal delivery drivers to function efficiently. Better yet, you’ll get to the market quicker and with fewer hiccups.

A rundown of the Chipotle app

Sure, many restaurants are using this system but we’re here to look at Chipotle because, well, it’s mostly awesome. First, if you don’t have the app, pull yourself together and get it on the Apple App Store or Google Play. Odds are good that you could have a burrito in hand within the hour if you act quickly. Note that you can also use Grubhub or Uber Eats as Chipotle partners with them too, however, the Chipotle app doesn’t leverage technology from either platform like it does with DoorDash.

Like most modern apps, the onboarding process is fairly quick, despite its lack of social logins or objectively better systems like Sign in with Apple. If you’re not going to include a third-party authentication service in your app, then make sure the process is painless for the end-user, a la the Chipotle app.

Once logged in, you’re taken to the main screen which allows you to choose whether you want pickup or delivery. Tapping either the ‘Order Now’ or ‘Menu’ allows you to begin constructing deliciousness – on subsequent visits, the former option will be replaced with an ‘Add to Bag’ option, allowing you to quickly re-order the same thing. Another link will also appear that allows you to further access other past orders as well as any favorites you’ve saved.

Connoisseurs will immediately recognize Chipotle’s Americanized-taqueria menu and anyone who’s “been meaning to try it” for the past decade shouldn’t have any issues putting together a satisfying meal through the app’s well-designed menu.

Ingredients are essentially listed in the same logical “flow” you’d find in the brick-and-mortar restaurants, starting with the “protein” choices (i.e., meat or their seasoned tofu option called ‘Sofritas’), followed by the type of rice, beans, and so on. Virtually everything here can be customized by sliding the item to the right which will reveal additional, contextual options like the ability to put an ingredient on the side or double-down on the protein option when you’re fiercely hungry.

One other thing to note here is the little leaf icon in the top right-hand corner reveals allergen information which is kind of a big deal. As someone with a peanut and tree nut allergy, this is much appreciated – potential customers that have significant allergies are usually reluctant to try different foods without being absolutely sure they won’t die. Doing so, especially when you’re not a well-known entity like Chipotle, can help generate revenue from weaklings like me.

After you’ve configured your entrée to your liking and added any extras to your cart, payment comes next. On Android, assuming G Pay is configured, this should populate as the default payment option. Like items in the food menu, the G Pay card icon can be slid to the side to reveal additional payment options. Any card information provided can be saved for future use or, you can opt to make a one-time payment that won’t be retained by the system.

For pick-up orders, the app provides a time for pickup which means you should be able to simply walk in and grab your order. More on that below. Delivery orders will provide a timeline for delivery as well as an external link to the DoorDash site where you can watch the little vehicle icon make its way from the restaurant to your location.

Finally, after a day or two, you’ll be credited with points based on the dollar amount you spent (excluding service fees, taxes, your hopefully generous tip, etc.) These points can later be redeemed for more food or applied toward things like Chipotle swag.

A few interesting points about the system are that there’s a bit of a delay in issuing points to a user but they’re really easy to use once available. The delay might seem a little odd to customers but they do it for a reason as it’s much more difficult to subtract points should a customer receive a refund so the wait time helps reduce the likelihood of over issuing points.

The DoorDash system – and others like it – provide a mostly turnkey solution for businesses that are either looking to simply use core platform features with minimal tweaking or for those that need something more custom. Though much of Chipotle’s overall current success stems from their size (and new leadership that helped fix the brand image over the last few years), their successful digital transformation effort is what allowed them to hit $1.6 billion in sales during 2020 – 49% of this revenue was generated from mobile orders alone.

Chipotle has been ahead of the curve which allowed them to easily withstand the pandemic that has forever altered the restaurant and food delivery industry. As such, restaurant entrepreneurs and existing businesses that are looking to go digital should use Chipotle as an example – the app provides a near-perfect model of how a modern restaurant app should look and function.

With that said, there are a few things to keep in mind.

Most smaller restaurants and budding franchises simply don’t have access to a ton of resources like Chipotle. Behind that slick app is a ton of research, testing, and strategy that true digital product agencies like Blue Label Labs leverage to make the apps we build successful. So, when you expect an app to play a significant role in contributing to your revenue stream, your best bet is to find an experienced team who will work with you to dig deep and do it right: it’s more than just hiring some designers and devs who can bang out an app and publish it to one of the major marketplaces.

Another important factor to consider is the level of customization that DoorDash (and others) provide. The out-of-the-box tools in these systems are good for basic operations like providing a custom menu, payment processing, and so on, but certain aspects will greatly benefit from a bit more attention.

For example, the Chipotle app doesn’t know when they’re out of guacamole or short-staffed which can lead to situations like this:

Being able to take mobile orders is great but it can be an overly mechanical process that doesn’t accommodate for what’s actually possible at a location, given certain conditions. Pictured above is a Chipotle I visited as part of my tasty research process – they were understaffed and literally couldn’t keep up. This resulted in a mob of pissed-off, hangry customers who might have been a little more understanding if only their expectations weren’t shattered by this little sign while on an empty stomach. 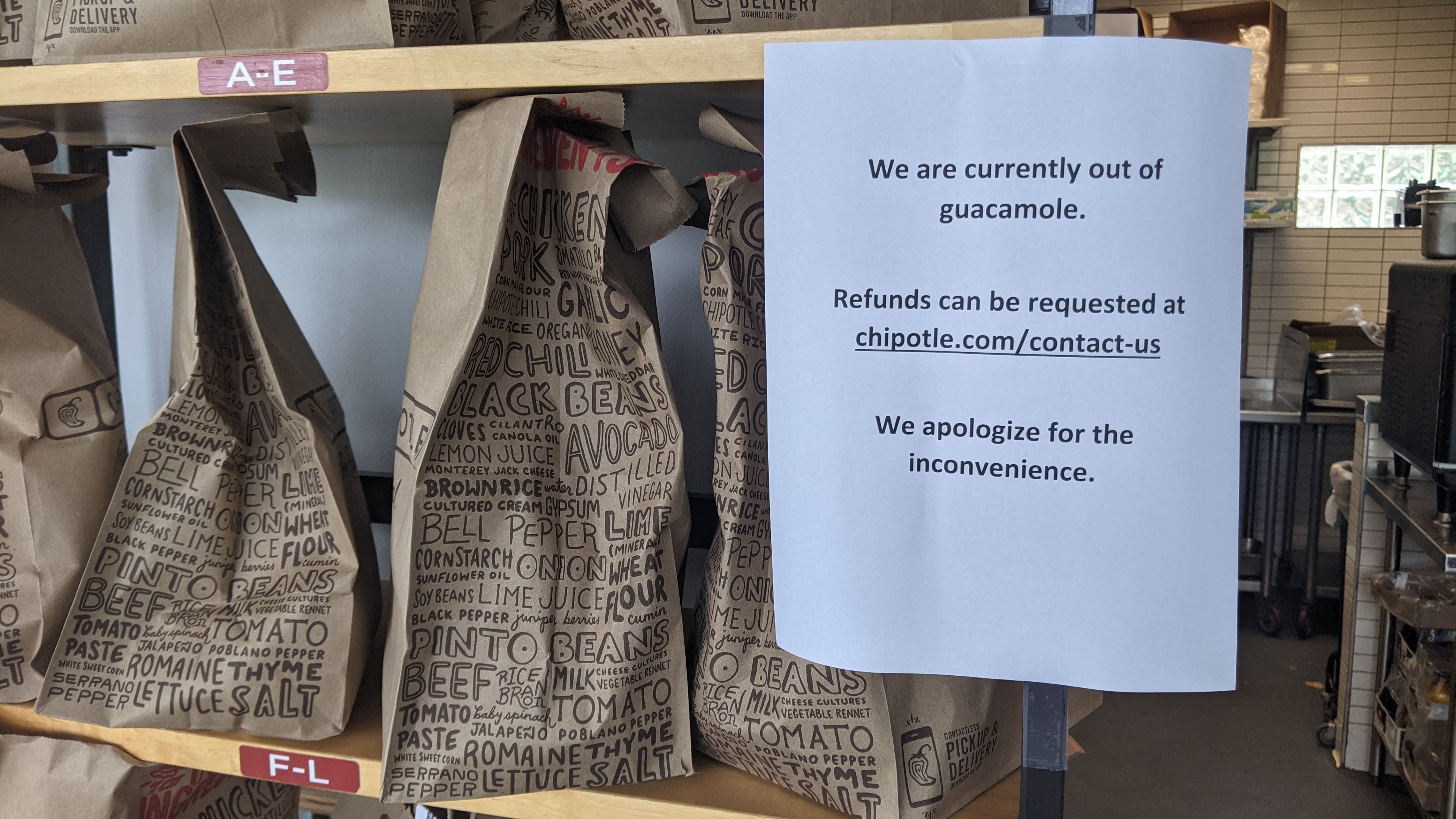 Moreover, if you placed your order through the app, you wouldn’t know they were out of guac until you either encountered this sign or God forbid, bit into your burrito.

The thing is, this situation could have been avoided or at least mitigated if the app were “aware” of the situation. It’s entirely possible to build a portal for staff that would allow them to indicate they’re out of a certain ingredient which would be reflected in the customer-facing app (e.g. it would be grayed out.) It could even be configured to adjust pick-up or delivery estimates for times when Shane and Todd don’t show up to their shifts and no one else is available to pick up the slack.

The app is still solid but with a little more customization, it would be even better. If you’re building an app, make sure to at least explore options that will cover all the bases.

Let’s build something together

If you’re looking to build a restaurant app, it’s a great idea to consider platforms with tried and true tools that will help you deliver a quality product to the market quickly. Through customization and analysis, we’re able to help you uncover the best tools on the market and build a product that will delight your customers (provided your food isn’t awful!) For more information on how we do it or to discuss your idea, get in touch today.