Start An App Business The “Easy” Way: Buy One!

There are two kinds of entrepreneurs: those who want to manage new ventures from start to finish, and those who want to take over existing ones. If you’re the latter and have a brilliant idea for an app, the app industry has a place for you.

In the past, creating apps for business ventures (such as developing apps for B2C businesses) used to require actually building the app yourself or hiring experts, and launching your product on an app store. For instance, if you wanted to create the next Uber, you’d coordinate with on-demand app developers to turn your idea into a reality.

It’s worth noting that’s still a valid method if you’re wondering how to start an app business. However, it’s also important to understand that starting an app business these days doesn’t necessarily need to involve developing a completely new app. Today, the barriers of entry are much lower for those who want to run an app-based business but don’t quite have the time, patience, or desire to start from scratch. With app brokeraging and ready-made app marketplaces, app entrepreneurs can launch an app without having to actually build one.

Do you want to know how to buy an app instead of hiring developers to create your app? This guide explains the basics of how to start an app business by purchasing an app that already exists. Consider this method if you want to get in on the app business but understandably don’t want to take the risks involved in coming up with an untested idea.

How to Buy Ready-Made Apps

You can buy ready-made apps at app brokerage sites like Fliptopia (formerly Apptopia, which now primarily serves to offer app owners and developers information about their apps’ performance in relation to competitors), Sell My App, and Appslit.

Fliptopia, launched in 2012, has remained one of the most popular app trading marketplaces despite the business changing somewhat over the years. Whereas other sites allow developers to sell app licenses, source codes, and other components of an app, Fliptopia sells ready-made app packages complete with exclusive rights and source code. Thus, it offers a very convenient solution to anyone wondering about the cost of making an app. Prices are simply based on the existing product, so budgeting for buying an app is extremely simple. 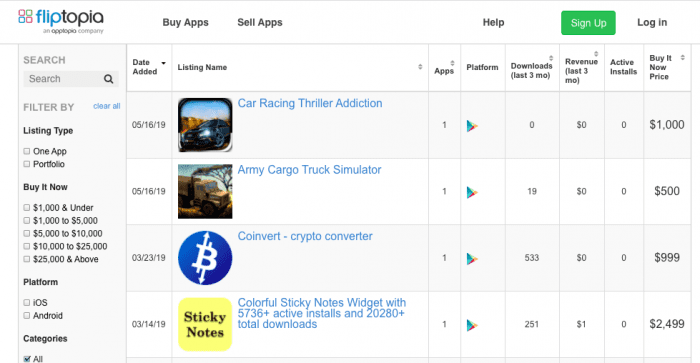 The cost of an app on Fliptopia varies depending on a wide range of factors. To better understand how to buy an app on this platform, see recently sold apps and final selling prices here.

Who are the buyers?

Who are the sellers?

What are the advantages of buying apps?

What are the disadvantages of buying ready-made apps?

“Good apps might appear to perform poorly because they are relatively new or because they’ve been marketed poorly. Others might be legitimate fixer-uppers. Ultimately, buyers have to rely on their best business sense before taking out a flyer on an app.”

The app industry is more than about app development and app stores. App entrepreneurs exploring how to start an app business don’t just have the option of developing apps. They can skip the development process, too, and just buy an app. With app brokerage sites like Apptopia, appsters can take ideas and turn them into apps – without ever building one.